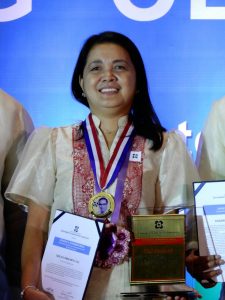 National Institute of Geological Sciences (NIGS) professor Carla B. Dimalanta, D.Sc., received the 2018 Outstanding Research and Development for Basic Research or the Eduardo A. Quisumbing Medal from the National Academy of Science and Technology (NAST)-Philippines.

The Eduardo Quisumbing Medal Award recognizes an individual or group who has made outstanding contributions through research in the mathematical, physical or life sciences.

She received a trophy and a medallion during the opening ceremonies of NAST Week celebration on Jul 17 at the World Trade Center in Pasay City.

Dimalanta was acknowledged for the project “The Second Phase of the Philippines-Taiwan Integrated Geodynamics Project.” Funded by Department of Science and Technology, the project was implemented from 2011 until 2015 in the Samar islands to study the overriding plate which collided with the continent-derived Palawan Microcontinental Block. Dimalanta worked with Dr. Decibel Faustino-Eslava of UP Los Baños and Drs. Betchaida Payot and Noelynna Ramos of NIGS. Through this project, their team set up the only paleomagnetic laboratory and the first and only electron microprobe analyzer in the Philippines.

According to Dimalanta, new data generated from the project were highlighted in eight published papers in Web of Science-indexed journals. The study also funded the master’s thesis of four graduate students; three of them are currently doing their PhD studies in Japan. The project produced a PhD graduate at the National Central University in Taiwan. 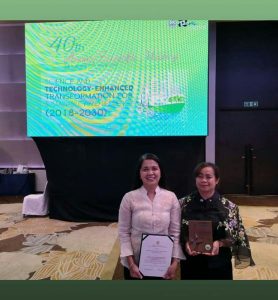 In a separate ceremonies held in July 12 at the Manila Hotel, NAST also honored Dimalanta and her co-authors namely: Dr. Decibel Faustino-Eslava; Dr. Graciano Yumul Jr.; Dr. Nathaniel Servando and Mr. Nathaniel Cruz, for their paper “Geohazards, tropical cyclones and disaster risk management in the Philippines: Adaptation in a changing climate regime.” Their publication was chosen as one of the Outstanding Scientific Paper.

The paper, published in the Journal of Environmental Science and Management in 2013, highlights the devastation experienced in northern Luzon due to Typhoon Pepeng in 2009. Dimalanta said their study brought to light how the geologic setting and geographic location of the Philippines predispose the nation to certain hazards.

“It also emphasizes the role of geoscientific researches as an indispensable tool in providing reliable and timely information that are well-targeted to address pressing societal issues. Most importantly, the paper calls on policy makers, researchers, and national and local government executives to use science-based information for making development and disaster risk reduction and management plans,” Dimalanta explained.

For her significant contributions in the field of geology in the country Dimalanta has been recognized with the following awards: the NAST-Philippines Outstanding Young Scientist in 2003; UPD 2010 Gawad Chanselor Para sa Natatanging Guro; UP Scientist I (2006-2008 and 2009-2011); UP Scientist III (2012-2014 and 2015-2017); and the One UP Professorial Chair Award (Outstanding Research and Public Service) 2016-2018.

A Professor 10 at UP NIGS, Dimalanta’s specialization and research interest is in Exploration Geophysics. She earned her Doctoral of Science degree in Earth and Planetary Sciences from the University of Tokyo, Japan in 2001.

Dimalanta is currently the Assistant Vice President for Academic Affairs (Research) of the UP System. She also chairs the Scientific Committee of the Annual Geological Convention of the Geological Society of the Philippines.