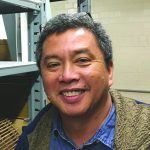 The National Academy of Science and Technology (NAST) Philippines has recognized three UPD professors for their outstanding contributions in the advancement of science and technology in the country.

Dr. Cesar L. Villanoy of The Marine Science Institute (MSI) was conferred the title Academician (Acad.) for his researches and studies in physical oceanography.

The title Academician is a peer recognition. A candidate, a scientist for that matter, joins the roster if he obtains more than 50 percent of the votes of the total membership of NAST. The membership is the policy making body of the Academy.

Meanwhile, Dr. Nathaniel P. Hermosa II of the National Institute of Physics and Dr. Aletta Concepcion T. Yñiguez also of MSI were recognized as this year’s Outstanding Young Scientists (OYS) in the field of physics and marine biology and fisheries, respectively.

The awardees will receive a medal, a trophy and cash prize. The awarding ceremony will be on July 13 at the Manila Hotel.

The OYS award is given annually to young Filipino scientists who have made significant contributions to science and technology. In addition, the awardee should be “of exceptional ability to undertake scientific research as evidenced by papers published in reputable scientific journals.”