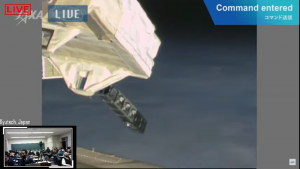 (MAR. 15)—Maya-2, the second cube satellite (cubesat) designed and made by Filipino engineers under a joint program by UP Diliman (UPD) and the Department of Science and Technology (DOST), is now orbiting the earth.

In a livestream from the Japan Aerospace Exploration Agency (JAXA), Maya-2 was released into space from the International Space Station (ISS) on March 14, at 7:20 p.m. Philippine Time.

Maya-2 was designed and developed by Mark Angelo Purio, Izrael Zenar Bautista, and Marloun Sejera, Filipino scholars who were sent to Kyushu Institute of Technology (Kyutech) by the Space Science and Technology Proliferation through the University Partnerships Project of the Space Technology and Applications Mastery, Innovation and Advancement (STAMINA4Space) Program.

STAMINA4Space is DOST-funded, monitored by DOST-Philippine Council for Innovation, Energy, and Emerging Technology Research and Development (DOST-PCIEERD), and implemented by DOST-Advanced Science and Technology Institute (DOST-ASTI) and UP Diliman (UPD).

Maya-2 was launched with two other identical cubesats from Japan (named Tsuru) and Paraguay (named GuaraniSat-1).

According to the National Aeronautics and Space Administration (NASA), BIRDS-4 is the “continuation of an international small satellite development project under a strategic partnership agreement between Kyutech and JAXA.” 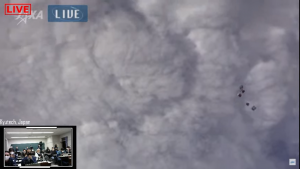 “The mission of the BIRDS-4 satellites is to test commercial off-the-shelf components, as well as new technologies such as Perovskite solar cell and antenna using the satellite structure to prove their worthiness in space,” the agency added.

Next steps. “Right now we hope to execute all our missions with the help of other BIRDS ground stations around the world so that we could utilize the satellites to their full extent,” said Bautista, BIRDS-4 Project Manager.

Sejera said the team is now preparing for the satellite operation, which includes satellite health monitoring and mission execution.

The three cubesats will travel around the earth daily, primarily taking images of the earth and relay information such as weather station telemetry and emergency announcements in the area it may happen to be passing over.

DOST-ASTI will gather data from Maya-2 through the Philippine Earth Data Resource and Observation Center located in Quezon City.

“As the principal investigator of the BIRDS program, I am very happy to see Maya-2 deployed from the ISS,” said Dr. Mengu Cho, BIRDS Project Principal Investigator.

“After seeing the infant space programs in many countries, I can say that the Philippines is one of the best examples of a success story… for Maya-2, three students from the Philippines are engaged and play key roles in the entire BIRDS-4 project. I am sure that they can be an important asset to the future Philippine space program. So far, I have supervised five Philippine students under the BIRDS program and have been always satisfied with their talents and sincereness to study,” he added.

Philippine Space Agency (PhilSA) Director General Dr. Joel Marciano Jr. issued the following statement, “Just as how computers on Earth have helped to improve our lives, satellites like Maya-2 are ‘computers in orbit’ that work for us from space. With the release of Maya-2 from the ISS, the genius words of Mark Weiser, father of ubiquitous computing, resonate with renewed meaning and inspiration: ‘The most profound technologies are those that disappear. They weave themselves into the fabric of everyday life until they are indistinguishable from it’. Like Diwata-1, Maya-1 and Diwata-2 before it, Maya-2 now ‘blends’ into the background to serve and perform its mission.”