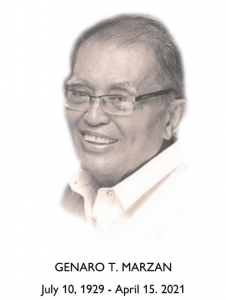 Marzan was instrumental in the creation of the National Cartography Authority, which would later be merged with several other bodies to form what is now known as the National Mapping and Resource Information Authority under the Department of Natural Resources.

In 2003, he received a National Research Council of the Philippines  Achievement Award in recognition of his outstanding achievements in Cartography and Photogrammetry.

Marzan joined the COE faculty in 1964.  UP sent him to complete his graduate studies to the University of Illinois in the United States in 1968.  There, he completed his Master of Science in Civil Engineering (1969) and his PhD in Photogrammetric Engineering (1976) while also earning a Certificate of University Administration at the Wisconsin University.

He returned to teaching at UP in 1976 and at the same time went on to serve in various capacities as administrator.  Marzan was Vice Chancellor for Community Affairs from 1988 to 1989, and COE-DGE Chair which he served concurrently as Director of Training Center for Applied Geodesy and Photogrammetry (TCGAP) from 1984 to 1989 and then again from 1992 to 1994.  He retired from University service in 1996. He was the first ever recipient of the Dean Alfredo J. Juinio Lifetime Achievement Award.

According to the DGE’s announcement, Marzan fought fiercely for DGE independence and against the devolution of the BS Geodetic Engineering Program during “one of the most difficult times in the department and the nation.”

“In the 1980s, despite the popular belief that maintaining the Program’s independence is impractical because it is less glamorous and involves tedious work, he stood his ground,” the statement read.  “He fully believed in the importance of geodetic engineering in nation building and we are seeing what he fought for, today. He saw and believed in the next generation, and we will carry his legacy forward into the next.” 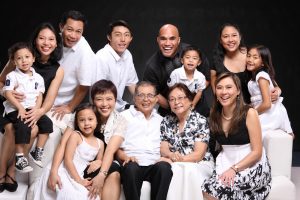 Those who wish to physically send their condolences may send them to 53 Mahabagin cor. Mahiyain St., Teachers Village, QC.

“The Marzan family is grateful for the outpouring of love and support from family and friends including former students. He touched many lives,” they said.

The family also organized a 9-day Novena for him from Apr.16 to 24, 11:30 a.m. Manila Time. The Zoom link can be accessed here or through the following login details: Meeting ID: 765 3290 2679; Passcode: Genaro. The program and prayers may be accessed here.

He is survived by his wife Fe Briones, daughters Jocelyn Christina (former dean of the UP Manila College of Allied Medical Professions), Katherine Anne, Miriam Ruth and Nerissa Susan as well as five grandchildren.