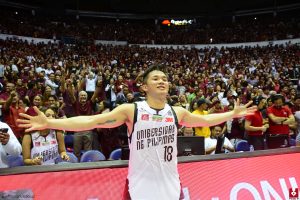 Captain and graduating senior Paul Desiderio once again delivered in the clutch to help the UP Fighting Maroons outlast the Adamson University (AdU) Soaring Falcons, 89-87, in overtime, to send them to the finals of the University Athletic Association of the Philippines (UAAP) Season 81, before a mammoth crowd of over 20,000 at the Smart Araneta Coliseum in Cubao.

After being down by 6 points with 2:41 left in extra time, it looked like the Maroons had lost the kind of gusto they showed all game, but a pull-up from Diego Dario and an and-1 play from Juan Gomez De Llaño would breathe some life back into them. Now only down by a basket, Bright Akhuetie, who was already hobbling with cramps, came out of nowhere to snatch the rebound off a Gomez De Llaño miss and stuck it back up to tie the game at 84. On the next possession, AdU’s Jerick Ahanmisi made a move to the paint, converted on a point-blank attempt, but the officials blew their whistles to signal a foul downstairs, therefore nullifying the made basket. Ahanmisi, however, would go down with cramps and would struggle to make it back up on his feet. Franz Pumaren decided to send in second-string swing man Jonathan Espeleta for the embattled Ahanmisi to take the free throws in his lieu. Espeleta split the charities to give the Falcons a solitary lead, 85-84, with 58.2 seconds left in the game. 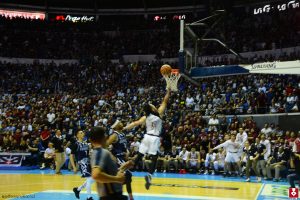 The Maroons then put the ball in the hands of former Falcon JD Tungcab who drove and found a wide-open Desiderio for the 3, giving their squad a two-point lead going into the final 41.3 seconds of the match. Jerom Lastimosa was fouled on the ensuing play by Dario, giving him two freebies at the foul stripe. Lastimosa converted both free throws to tie the game, 87-apiece, 27.1 seconds left.  Desiderio then commanded the rock and waited for the shot clock to read 10 seconds before making his move. The captain took it to the post and nailed a turnaround over the long and tall Sean Manganti to wrest the final score at 89-87. AdU would have another shot at winning the game on the other end but Lastimosa’s three-point attempt went off far left.

The Fighting Maroons led almost the whole game but the Soaring Falcons would snatch it from them with just 10 seconds left in the 3rd quarter on an and-1 conversion by Simon Camacho, 65-64. Lastimosa would make it a 3-point affair going into the 4th after beating the buzzer with a lay-up in transition. The Maroons would crawl back and tied the game at 72 apiece at the 5:02 mark of the final quarter. It would be a back and forth affair from then on. 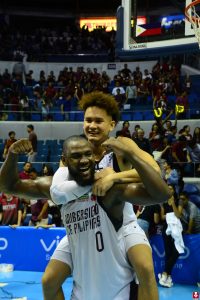 With UP up by 3 after two free throws by big man Jerson Prado, Ahanmisi countered on the opposing end and coolly sank one from mid-range to bring the Falcons within 1, 76-75. UP botched its next possession and the ball found itself in the hands of Manganti. Manganti, however, lost the ball as he made his move to the rim. Desiderio dived and recovered the loose ball, brought it up the court to set up Jun Manzo who drove and spun a floater off the glass to put them up by 3 again, 78-75, 10.7 left in regulation. AdU called a timeout and made Camacho the designated inbounder. He fired in to Manganti, who lost the ball, Desiderio once again dived for it but Camacho forced a jump ball. In the next play, Camacho inbounded to Lastimosa who pulled up and kissed a 3 off the glass in the left corner to send the game into overtime.

Sophomore sensation and mythical team selection Gomez De Llaño paced the Diliman-based squad with a new career-high of 30 points to go along with 6 rebounds. Desiderio, who was 2 of 18 before those two big shots in the end, managed to finish with 16, while MVP Akhuetie wound up with 13 while grabbing 17 boards after finishing with only 6 points in game 1. Ahanmisi led 4 other AdU players in double digits with 20. Lastimosa had 17, while Papi Sarr and Camacho had 16 and 10, respectively.

The UP Fighting Maroons will face the Ateneo De Manila Universtiy Blue Eagles on Saturday, 3:30 p.m. at the Mall of Asia Arena in Pasay for the Game 1 of the UAAP Season 81 Finals.