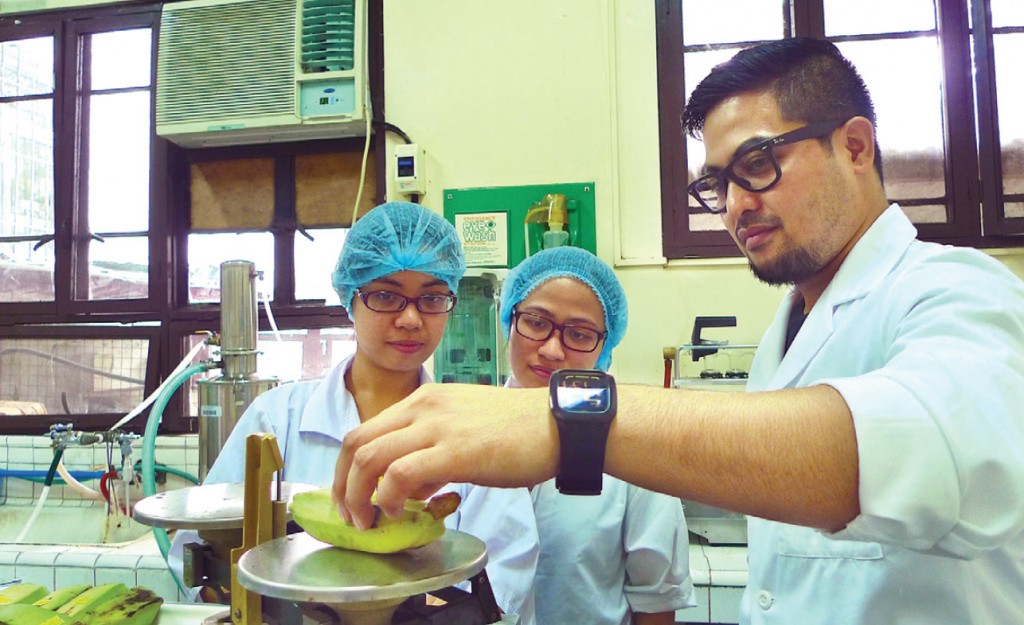 Gabriel at the lab.

(July-August)—How safe is your buko water?

Buko beverages are prepared manually, making them vulnerable to contamination of pathogens or disease-causing microorganisms, says Dr. Alonzo A. Gabriel, an associate professor at the Department of Food Science and Nutrition of the UP College of Home Economics.

“The highly manual nature of the preparation of buko water, even those commercially sold, makes it more susceptible to pathogen contaminations. The more contact with the person preparing the product, the higher the risk or susceptibility of the product to pathogen infections,” explained Gabriel.

Because of the coconut water’s high nutritional value, Gabriel said it is an ideal breeding ground for harmful microorganisms. This happens during the manual opening of the drupes and scraping of the solid endosperm or coco meat. However, “heating the coconut liquid endosperm of coconut water to 55°C can reduce the risk of contamination,” Gabriel points out.

The research comes in very handy because of the high consumer demand for healthy and less processed products, one of which is coconut water which is valued for its therapeutic benefits.

Gabriel’s study investigated the best settings for mild thermal processing of coconut water and determined the heat resistance characteristics of the three disease-causing microorganisms. The ultimate goal is to come up with an affordable and effective means of treating coconut water.

Funded by the PhD Incentive Award of the UPD Office of the Vice Chancellor for Research and Development, the study was published in the Food Control Journal under Elsevier Publications, in August 2013. According to Gabriel, the first part of their study was the collection of samples of the coconut water from different places in the country. They did this to determine the physicochemical characteristics (pH, sugar content, acidity) of coconut water that are normally consumed by people.

While collecting coconut water samples, they cultured the three pathogens used in the study, which according to Gabriel are the common microbial contaminants among fruit juices and food products.

After the acid adaptation of pathogens, the microbial samples were placed in the coconut water and were subjected to heat treatment.

Results of the study showed that the non-acid adapted Escherichia coliO157:H7 was the most heatresistant. The pathogen was subjected to 55°C thermal treatment for 116 minutes, before being eliminated.

Gabriel, however, was quick to point out that the result in this study is not applicable to other fruit juices.

“Interaction of organisms uniquely varies from one fruit to another. So, manufacturers have to use different testing for every fruit juice or food product,” Gabriel explained.

While pasteurization techniques are normally used to reduce or eradicate bacteria in coconut water, there are fears or beliefs that severe heating may alter the buko water’s sensory characteristics.

“To optimize the safety of coconut water or the buko beverage, especially for small scale industry, it is best to apply heat treatment to make sure that the product they are selling are safe for human consumption,” Gabriel said.

Coconut tree is an economically important crop in the Philippines. Because of the many uses or products derived from the coconut tree, it earned the moniker the “tree of life”

Despite the booming status of this lucrative enterprise and the high risk of pathogen contamination in coconut water, Gabriel said very few research studies are done on the safe preparations of ‘buko water’ unlike that of the apple and orange juices. “Malaki ang industriya pero kaunti ang information natin sa coconut water.”

The research study, according to Gabriel, also aims to provide manufacturers with scientific bases on how to process their juice and food products safely.

“This is important because we have a Food Safety Act which was signed by President Aquino in 2013. According to that law, manufacturers who do not comply to safety rules will have their business permit revoked,” explained Gabriel.