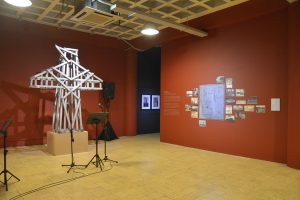 (FEB. 19)— “Lupang Hinirang: Mga Kuwento ng Pagsasalugar ng UP Diliman” an exhibit commemorating the 70th anniversary of UP’s transfer from its original site in Ermita, Manila to its campus in Diliman, Quezon City, opened on Feb. 15 at the Bulwagan ng Dangal (BnD) University Heritage Museum and will run until Mar. 19.

From the exhibition notes, “Lupang Hinirang” explores UPD’s layered story as a haven for intellectual, creative, and critical thought; as a space of social action and advocacies; and as a community with its own sense of history and hopes for the future” through the lens of history, anthropology and geography, using the archival research, oral history methods, art installations, interactive story maps, video documentaries and art installations. 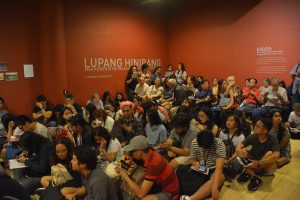 This features video documentaries produced by Loujaye Sonito of the Department of English and Comparative Literature; art installations by the College of Fine Arts (CFA) faculty, and interactive story maps based on the research project of the Geography 192 (Field Methods in Geography) class. 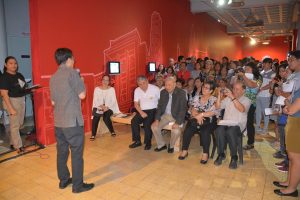 Prof. Cecilia De La Paz, PhD, Department of Art Studies professor and Office for Initiatives in Culture and the Arts (OICA) director, and Prof. Ricardo T. Jose, PhD of the department of History, curated the exhibit in collaboration with the research team from the Departments of History, Anthropology and Geography.

Chancellor Michael L. Tan said he hoped that the UP community will continue to celebrate the university’s milestones.

Tan also urged the students who attended the exhibit opening to collect more stories about UP and pass it on to the next generation.

“Mas mahalaga dito, sa mga estudyante natin, tandaan ninyo na kayo ang lumilikha ng kasaysayan. You are the ones who will be creating the stories for the next generation at sana nga ay maitupad natin ang karangalan, kahusayan, and that you will be proud to share, 10, 15, 20 years from now, your contributions to UPD even as you protect the heritage that we are leaving behind you,” he said.

De La Paz said the exhibit’s last day will coincide with a forum on “Memories and History of UP Manila and UPD” featuring research works that complement the exhibit.