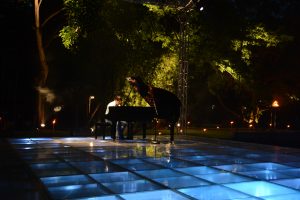 (APR 25)—The UP Lagoon near the Beta Theatrum is usually a place for quiet contemplation, but on 6 p.m. on April 24, it was transformed into a concert venue for the opening ceremonies of Linggo ng Parangal.

The Linggo ng Parangal is a week-long celebration to recognize the outstanding performance of its faculty, Research and Extension Professional Staff (REPS), students, staff and the community.

The theme of this year’s festivities is “Banyuhay” (Metamorphosis), from the phrase “bagong anyo ng buhay.”

Performers. The evening began with Jourdann Petalver of the College of Music performing “Etude Op. 40, No. 1” and “Etude Op. 40, No. 8” on the piano, two pieces by Russian composer Nikolai Kapustin who is known for his pioneering work on improvisational jazz pieces that fuse classical and contemporary sounds. 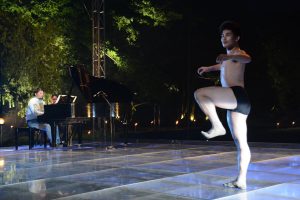 Petalver on piano and Robles in the foreground.

For the next number Petalver was joined by Mark Lentejas Robles of the UP Dance Company (UPDC) as they performed “K’lintang” by National Artist for Music Ramon P. Santos, which is inspired by sound of the kulintang.

Petalver performed the piece on a piano while Robles performed a solo routine choreographed by UPDC Artistic Director Elena Laniog.

They regaled the crowd with their unique jazz medleys of top 40 hits and old OPM favorites such as “Happy” by Pharell Williams, “Bad Romance” by Lady Gaga, “Paraiso” by Ryan Cayabyab and “Yakap sa Dilim” by the APO Hiking Society. The crowd was so delighted Baihana had to do an encore, performing “Bituka,” a song composed by K. Cayabyab during her student days in UPD.

2017 Gawad Tsanselor winners. The highlight of the evening was the announcement of the 13 individuals and one residential area who will receive the 2017 Gawad Tsanselor.
First to be announced were the Gawad Tsanselor para sa Natatanging Mag-aaral: Katherine Adrille Bersola (B of Sports Science) from the College of Human Kinetics, Willard Joshua Jose (BS Electronics and Communications Engineering) and Dave Ramos (BS Chemical Engineering) of the College of Engineering and Jose Rafael Toribio (BS Business Administration) of the Cesar E.A. Virata School of Business. Ramos and Toribio were present during the ceremony. 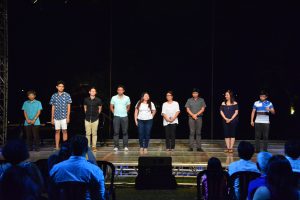 The winners of the 2017 Gawad Tsanselor

Next were the Gawad Tsanselor para sa Natatanging Kawani: Eric Juanillo, Building Administrator of the College of Arts and Letters (CAL) and Shirley Arandia, Administrative Officer of the UP Diliman Information Office.

The three Natataning Research, Extension and Professional Staff (REPS) were up next: Davino Edric Adao of the Natural Sciences Research Institute, Christian Joy Cruz of the UP Population Institute and Eimee Rhea Lagrama of the University Library. Adao was present during the ceremony.

The last to be announced were the Gawad Tsanselor para sa Natatanging Guro: Prof. Patrick Campos of the College of Mass Communication’s UP Film Institute, Dr. Maria Cecilia Gastardo-Conaco of the College of Social Sciences and Philosophy’s Psychology Department and Dr. Jonas Quilang of the College of Science’s Institute of Biology. Both Conaco and Campos were present during the ceremony.

The Gawad Tsanselor is UPD’s most prestigious distinction for performance excellence, given annually to members of the faculty, staff, REPS and students. 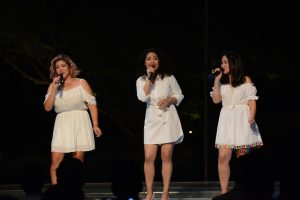 According to UPD Chancellor Michael L. Tan, the use of the UP Lagoon as a performance venue is a good indication of his team’s commitment to his administration’s agenda of “pride of place, pride in people.”

“Marami pang pagbabago ang makikita niyo dito sa Lagoon, I think in a way this is a trial and I hope that marami tayong makikitang potential dito sa Lagoon na pwedeng gamitin. Noon pa sinasabi ko na pwedeng may concerts tayo [dito]. [Campus] Architect Eric Tabafunda has given us sketches of another Lagoon na gagawin sa harap ng Office of the Campus Architect yung Lakandula at Jacinto. And all of this is part of our idea na kailangan dumami itong mga commons, areas where students and faculty can come together and take a break, to think, to write, to read,” he said.

On Wednesday, April 26, 2 p.m. at the GT-Toyota Auditorium, UPD will celebrate its’ employees’ service to the University during the Parangal sa mga Retirado at 2016 Gawad Paglilingkod.

On Thursday, April 27, 2 p.m. at the UP Theater, UPD’s student achievers and University Scholars—students who earned a General Weighted Average (GWA) of not lower than 1.25 for 2nd semester of AY 2015-2016 and the 1st semester of AY 2016-2017—take center stage at the Parangal sa mga Mag-aaral.

At 6 p.m. that same day the culminating event of the week will be held at the Institute of Biology Auditorium: the 2017 Gawad Tsanselor, which was moved from its original April 28 date due to Pres. Rodrigo Duterte’s Memorandum Circular 18 declaring April 28 a non-working holiday for government and private offices in Metro Manila due to the ASEAN Summit and related meetings.