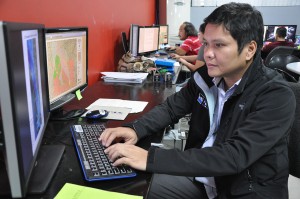 The first Asian to receive the award, Lagmay was recognized during the EGU 2015 General Assembly from Apr 12 to 17 in Vienna, Austria.

He was cited “for his outstanding interdisciplinary natural-hazard research and natural-disaster engagement in the Philippines, particularly with respect to volcanic hazards, earthquakes, typhoons, landslides and floods.”

According to EGU website, the Plinius Medal is awarded to mid-career scientists with outstanding research achievements in fields related to natural hazards, and how their researches have been applied in risk mitigation.

The award is named after Gaius Plinius Secundus (~23 – 79 A.D.), a Roman naturalist who wrote Historia naturalis, an encyclopedia of natural science dealing with: the nature of the physical universe; geography; anthropology; zoology; botany, including the medicinal uses of plants; curatives derived from the animal world; and mineralogy, including an account of the uses of pigments and a history of the fine arts.

Lagmay’s research interests are in computational fluid dynamics, geophysics, natural hazards, flood risk management and water engineering. He has extensive hands-on experience in search and rescue and forensic analyses of major Philippine catastrophes, including the lethal floods of Mindoro, Iloilo and Pampanga, the Guinsaugon landslide, the Mt. Mayon lahars, and the typhoons Ondoy, Pedring/Quiel, Sendong, Habagat, Pablo and Yolanda.

With a wide range of experience and expertise in geology and disaster science, Lagmay shares his research findings through public lectures and other outreach activities.

A consultant for the World Bank, Lagmay has received numerous honors and citations, some of which are: the 2014 University of the Philippines Alumni Association Distinguished Alumni Award in Disaster Mitigation, and the 2013 Professional Regulation Commission Outstanding Professional of the Year Award in the field of Geology.

He received the UP Scientist Award in 2008 and 2011, the 2012 New Media Digital Heroes Award and the 2012 Cyberpress Best IT Product of the Year for the development of the Project NOAH website and mobile tools.