Kwentong Mulat, a story of people

(APR. 22) — “Kwentong Mulat: The Diliman Commune Virtual Pasyal” is more than a tour of places on campus, it is also a narrative of people’s experiences and shared lives during the 1971 nine-day protest in UP Diliman (UPD).

This was how the project proponents described the virtual tour during its recent launch. 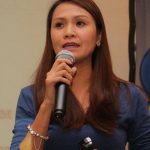 “More than the sites within UPD, it’s the story of people who have been to these places and who were able to live out their experiences during the Commune, kung ano ang napagdaanan nila, ano ang realizations nila, ano ang mga gusto nilang ibahagi sa mga taong hindi pa man naka-experience ng ganitong sitwasyon. Those seem to be more important rather than just focusing on the buildings alone,” she said. 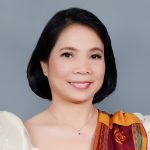 UP Asian Institute of Tourism Dean Leticia Susan Lagmay-Solis, Kwentong Mulat’s project leader, said the virtual tour is a clear example of how history and cultural memories give participants an accurate narration of significant events.

“Having been active participants of the Diliman Commune in 1971, their eyewitness accounts of events now serve as a permanent historical record of how students, faculty, [and] administrators of the UPD community joined forces to show defiance against a growing threat of dictatorship and repression,” she said. “Further, a reminder of strength, courage, fortitude that to this day defined the UP constituents who are always ready to defend UP from threats to suppression of rights and academic freedom.”

Meanwhile, Kwentong Mulat resource speaker Professor Emeritus Jose Y. Dalisay Jr. of the College of Arts and Letters discussed on the value of the virtual tour to today’s generation of UP students. 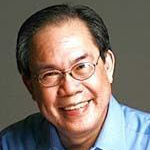 “What is this virtual tour’s value to the freshmen of 2021?” he asked. “It lies I think in understanding in what we are in UP for. And no! It is not only so that we can be rebels and put up barricades, although we did that when we had to. We are here to seek knowledge and to learn and to share of what we know with our people so we can improve their lives and bring justice to our society. That has not changed in 50 years.”

Dalisay reminded everyone, “To be of service, we need to be free to learn and free to teach. And increasingly our academic freedom has been threatened again by powerful political forces… The old barricades of wood and stone will no longer work. We must be as creative as those who seek as they 50 years ago to undermine us, responding to provocations peacefully, intelligently, and effectively.” 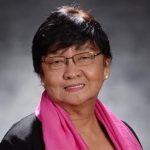 For her part, Professor Emerita Judy M. Taguiwalo of the College of Social Work and Community Development said she hopes through the virtual tour the new generation of Iskos and Iskas would respond to the call, “Humayo’t itanghal giting at tapang,” and lauded them with “Mabuhay! Ang pag-asa ng bayan.”

Finally, TVUP Executive Director and Professor Emerita Grace J. Alfonso of the College of Mass Communication said Kwentong Mulat “brings together the pathways, the images, the facades of hallways and buildings of UP and more importantly, the many stories of the past, the present and what they all mean today and how they can influence our future.” 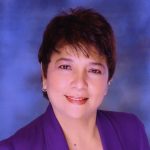 Alfonso said the virtual tour “… allows the movement of ideas interpretations of the young and the exchange of ideas through the narratives shared by those who were there in the Diliman Commune,” and added that the Commune is the story of UPD as a community that put together resources “fighting for freedom and thought and speech. And freedom from the shackles of repression and dictatorship.”

Pasyal. The virtual tour starts with a drone shot of the University Avenue, followed by a stop and greeting of the tour guides Andrea Ocampo, Julio Pajaro and Noah Webb at the Quezon Hall. Webb starts recounting the event of the Diliman Commune infront of Quezon Hall. After Quezon Hall, the audience is led to the front of the Melchor Hall, the twin building of Palma Hall. The next shot would feature the three tour guides walking along the Beta Way to make a short cut for the next destination, the Palma Hall. 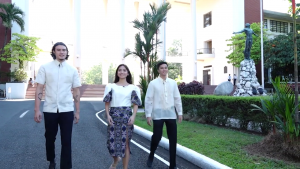 From Palma Hall, the audience is taken to the Sampaguita and Kamia Residence Halls, and later to the tour’s last stop, Vinzons Hall.  For more of Kwentong Mulat, watch it over the TVUP YouTube channel beginning 54:08.

Kwentong Mulat is part of the celebration of the UPD Arts and Culture Festival 2021 “Engkwentro” and in commemoration of the 50th anniversary of the Diliman Commune and the 500th year of the encounter of Spain and the Philippines.

“Engkwentro” is an initiative of the UPD Office of the Chancellor through the Office for Initiatives in Culture and the Arts and its partner institutions.