Jewel at the Institute 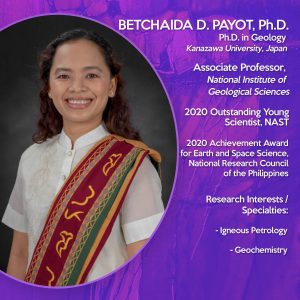 (March 19)—In celebration of International Women’s Month, the UP Diliman (UPD) College of Science (CS) chose to highlight their women scientists who made big strides in their fields and how they advanced scientific research.

Payot has carved a name in the male-dominated field of Geology and is recognized for her expertise in the operation of the only electron probe micro-analyzer in the Philippines “which advanced the country’s knowledge of magmatic-metasomatic processes [and] which actively operates beneath island arcs.”

Her research interests and specialization are on igneous petrology and geochemistry.  The Associate Professor earned her PhD in Geology from Kanazawa University, Japan in 2009, and her MS and BS in Geology from UPD in 2006 and 2002, respectively.

The National Academy of Science and Technology (NAST)-Philippines in its Facebook page describes Payot’s researches as “scientific works that contributed to the understanding of the origin and formation of igneous rocks (ophiolotes) in different parts of the Philippines. Her researches produced new petrographic and geochemical data that supported new models for a better understanding of the formation of igneous rocks.”

Payot started her scientific journey to help her family make ends meet.  Growing up in Bukidnon with six brothers and two sisters, she remembers her parents working hard to provide for their family.  Constantly, her parents reminded her and her siblings the importance of education and how it can help them get better opportunities in life. 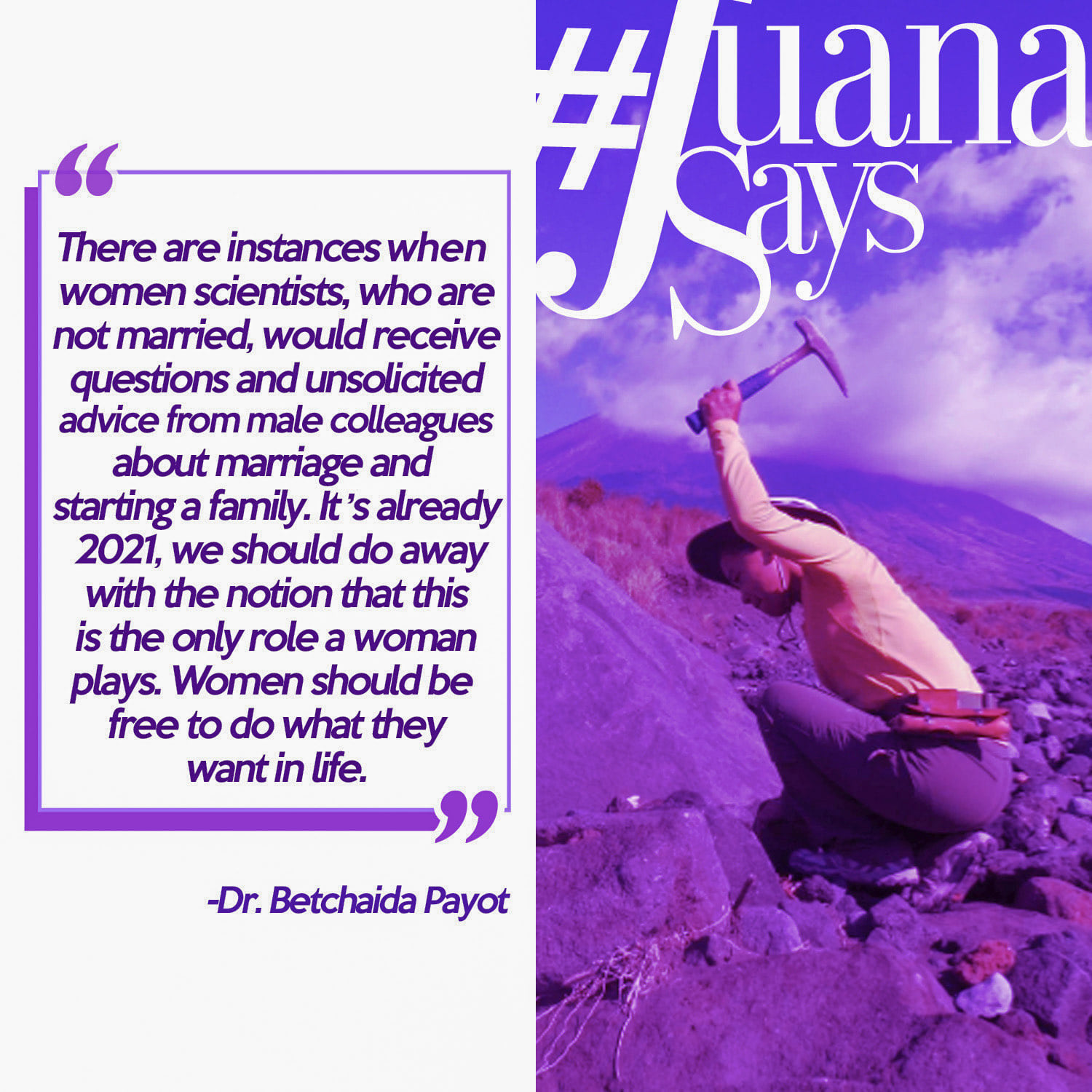 “My parents only attained secondary education, they did not even go to college, which made them work harder in the pineapple fields in order for us to get an education and eventually pursue our dreams. They saw education as the equalizer to our situation,” said Payot.

Fueled by her family’s overwhelming support and armed with a Department of Science and Technology (DOST) scholarship, Payot pursued a science degree in UPD.

She first majored in Physics, but then she found it hard and thought of quitting science, doubting if she really was cut out to be a scientist.  A good friend who was a Geology major encouraged her to not give up and try Geology instead.  On her second year in UPD, Payot shifted to Geology and finally saw herself building a career in geosciences.

When Payot graduated, jobs for Geology graduates were few and far between.  So she decided to pursue graduate studies and eventually applied as a research assistant for a project at NIGS.

“The project actually wanted a male research assistant since the terrain was difficult and the project staff were concerned if I could do it, but I really needed that job and I insisted that I could do anything I set my mind to. I got the job and I finished it. It was my first project and it was very rewarding. It fueled me even further to continue doing research,” recalled Payot.

A member of the National Research Council of the Philippines (NRCP), Payot authored and co-authored close to 40 researches published in international peer-reviewed journals. 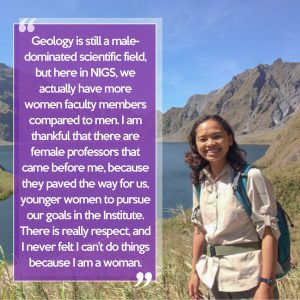 Payot is grateful for the support she is getting from her colleagues at NIGS where she never felt she can’t do certain things simply because she is a woman. She is also thankful that there were female professors that came before her, which paved the way for younger faculty members like her to excel in a male-dominated scientific field.

Her hard work and significant geological researches were not left unnoticed though. Early this year, Payot received the NRCP 2020 Achievement Awards in the field of Earth and Space Sciences. Last year, the NAST-Philippines bestowed on her the Outstanding Young Scientist Award (Geology). Payot is also a recipient of the UPD Centennial Faculty Grant (2016-2020), One UP Faculty Grant for Teaching and Research (2019-2021), and the UP International Publication Award (2014-2015 and 2017-2019).

A UP Balik PhD grantee, Payot currently heads the research program “Growth of an island arc (GAIA): Tectonic consequences and human impacts” comprising Project 1 “Evolution of the Luzon Arc: From Igneous to Sedimentary Processes” and Project 2 “Tectonic Consequences of Subduction in Northern Luzon.”  Project 1 will generate geologic data and reconstruct the tectonic and magmatic evolution of the northern segment of Luzon arc.  Project 2 focuses on identifying active crustal deformational structures, and generate a working model to explain the mechanism of active deformation in Northern Luzon.

Payot emphasized the need for more opportunities and proper education for every girl in the country in order for them to achieve greater things and pursue their dreams and aspirations.

One sad truth is that despite the scientific breakthroughs and accomplishments of women scientists in the country, Payot said they still receive misogynistic remarks from men, and even from some women, regarding their careers. 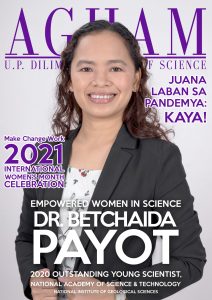 “There are instances when women scientists, who are not married, would receive questions and unsolicited advice about marriage and starting a family. It’s already 2021, we should do away with the notion that this is the only role a woman plays. Women should be free to do what they want in life,” Payot explained.

As a way of reciprocating how her mentors prepared her to become what she is now, Payot continues to guide students and researchers who pursue careers in geology. Presently, she has mentored five MS Geology students. She is actively involved in extension works for local communities as a resource person for the information and education campaign and lecture-workshops on geohazards. As a licensed geologist, Payot also served as lecturer to the Geology Board Review from 2015 until 2020.

“We need to provide more platforms and opportunities for young girls. When they are really given the right opportunity and support, they grow up to become empowered women, doing and achieving mighty things. It happened to me, so it could happen to others as well. Who would’ve thought that a ‘probinsiyana’ like me, who used to imagine life beyond the pineapple plantations in Bukidnon, would become a scientist achieving things beyond I imagined,” said Payot. — with reports from UPD College of Science