By Pearlyn Manalo, images by the Rushurgent Working Group 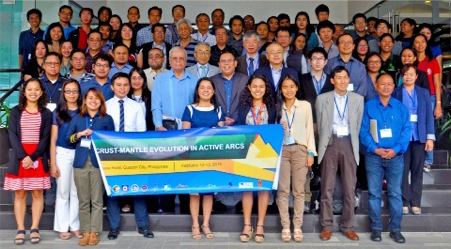 Local and foreign geoscientists with representatives from the government and private industries at the International Symposium on Crust-Mantle Evolution in Active Arcs.

(FEB. 23)—Local and foreign experts from different fields of the earth sciences gathered to discuss new findings and innovations in the international symposium “Crust-mantle evolution in active arcs” convened by the Rushurgent-Working Group (RWG) of the University of the Philippines – National Institute of Geological Sciences (UP-NIGS), on Feb. 12-13 at Sequoia Hotel in Quezon City, Philippines.

The 2-day event was divided into two parts: the first day on hard-core science and the second day on industry applications, with emphasis on the latest scientific achievements in the mining, exploration, oil and energy sectors. Eighteen papers were presented on the second day. 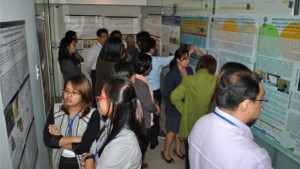 A total of 38 oral and 11 poster presenters discussed their latest scientific findings during the 2-day international symposium.

There were also 11 poster presentations with varied topics such as watershed landscape, use of decision support system, geo-hazard monitoring and warning systems, as well as geophysics and sedimentary geology.

The symposium was organized by the RWG led by Dr. Carla B. Dimalanta, a professor at UP-NIGS and Assistant Vice President for Academic Affairs (Research) of the UP System. The UPLB School of Environmental Science and Management, led by Dr. Decibel V. Faustino-Eslava, co-organized the event.

Representatives from government agencies, mining and exploration industry, oil and energy sector, academe and funding agencies were also present in the event.