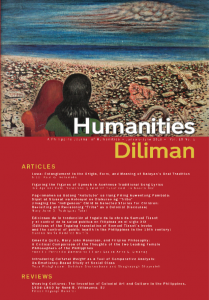 The latest issue of UP Diliman’s (UPD) official internationally-refereed journal in the Arts and Humanities has six articles and one book review.

Dr. Patrick F. Campos, the journal’s editor-in-chief, said “The present issue signal’s Humanities Diliman’s expansion in scope from being a journal devoted solely to Philippine studies to being a Philippine journal on the humanities in general.”

Campos noted that the journal features articles that “consider not only Filipino cultural forms and ideas, such as the theatrical tradition in Batangas, Filipino children’s literature, and women philosophers in the Philippines, but also the lyric tradition in Aceh, the translation history of a French medical text, and a proposed research tool for comparative cultural studies emanating from Mashhad.”

Belamide’s paper is an exploratory research on the origin and forms of “luwa,” a poetic performance held in honor of a patron saint in Balayan, Batangas. It uses the concept of “entanglement” as an alternative to hybridity and aims to “assess the significance of the luwa as both a colonial and post-colonial cultural form.”

The article of Fata, Yusuf and Sari is a descriptive study on the literature of Acehnese traditional song lyrics which also reflects the context of their culture, belief and life. The authors analyze eight songs based on the 11 figures of speech proposed by Kennedy and aims to investigate the “use of figures of speech in Acehnese traditional song lyrics.

and reproduction from the colonial to the post-colonial context. The author also notes that it aims to “contribute to the emerging discourses in children’s literature as it intersects with the politics of representation and ethnicity.”

According to Campos, Tatel assesses 15 stories for children from the 2000s “to verify if the colonial image of the tribe has been perpetuated into the new century or if contemporary writers have put counter-discursive images forward.”

Martin’s paper analyzes the evolution of the translation made on the work of Samuel Auguste André David Tissot, one of the more important hygienist medical doctors of the second half of the 18th century. The author traces the “historical geographical, and linguistic itineraries of the controversial medical text” by Tissot. Martin particularly focused on the Tagalog translation of Tissot’s book printed in the Philippines by a priest, Manuel Blanco which was edited three times (1823, 1831 and 1884) before the Philippines was occupied by the Americans and after the Spaniards left the archipelago (1916).

In the article of Demetrio and Liwanag, Campos said the authors contribute to the literature of male-dominated Philippine philosophy by situating the work of two Filipina philosophers of contemporary times, Emerita Quito and Mary John Mananzan and contextualizing their philosophies as the main discourses of Filipino philosophy and Philippine society.

The authors use the dialogical hermeneutics of Martin Heidegger and Hans-Georg Gadamer, this paper aims at a deeper understanding of their thoughts through a critical comparison.

In the article of Pishghadam, Shakeebaee and Shayesteh, the authors proposed in their study the use of sensory concept of emotioncy (emotion + frequency of senses) and also attempt to introduce cultural weight as a new comparative tool in cultural studies. To provide empirical support for the proposed concept, the authors apply these concepts in an empirical study on the attitudes of over 300 Iranians from different social classes on a number of religious concepts.

The editor notes that considering the diverse topics in the journal, “we gain a sense of the promises as well as the possibilities of a comparative approach to the humanities.”

“By expanding the scope of Humanities Diliman, the hope and the goal are for the journal to contribute to a wider cross-cultural dialogue that would sharpen all of our readers’ and contributors’ sensitivity to what is common among us in our humanity and how are differences are what move us to continually create shared places,” Campos added.

Humanities Diliman is an awardee of the Journal Challenge Grant through the Journal Incentive Program of the Commission on Higher Education. It is also a Scopus-indexed journal and is available via www.doaj.org and www.ebsco.com and has been listed in the ASEAN Citation Index at http://www.asean-cites.org/index.php?r=contents%2Findex&id=9.