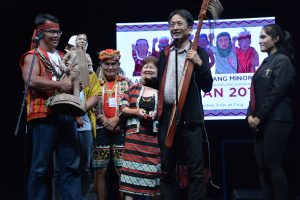 Members of national minorities banded together for a night of music, culture and protest on Sept. 18 as the Office of the Chancellor presented “Hugpungan 2017,” a two-part concert special held at the University Theater as part of “Lakbayan 2017: Kampuhan sa Diliman.”

Lakbayan 2017 is a caravan of national minority groups or lakbayanis from Luzon, Visayas and Mindanao who trooped to Manila to voice out their situation to a larger audience of faculty, students, staff and communities.

Over 2,500 lakbayanis gathered in Metro Manila from Aug. 30 to Sept. 22 and made camp at the former UP Stud Farm along CP Garcia Avenue, which they called “Sitio Sandugo.” Among the groups present at the sitio were the Cordillerans, Lumad, Mangyan, Aetas, Dumagats and the Bangsamoro. 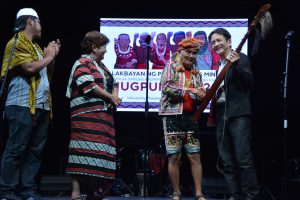 Presented by the Office of the Chancellor, the program was composed of two main suites representing performances from Luzon and Mindanao with special numbers in between, the night began with a prayer from Islam’s holy book, the Qur’an, recited by one of the readers from the sitio.

The Mindanao suite was first, beginning with the short skit “Kalagayan ng Bangsamoro” depicting the injustice and the human costs of the conflict between rebel groups in Mindanao and the Philippine government as performed by the Sindaw Performers, the cultural group of the Liga ng Kabataang Moro.

Next was a song-verse describing the lakbayanis’ journey by Datu Mansuladlad of the Banwaon tribe in Agusan del Sur representing Northern Mindanao.

The third act was “Dayan-dayan,” “Buwa-buwa” and “Siba” by performers from the Manobo tribe, these are traditional dances celebrating a wedding, the birth of a child and as a social activity.

It was then time for the Sandugo Chorale to take the stage and perform along with a music video.

After a 10-minute intermission, the UP Filipiniana Dance Group presented Subli, a traditional folk dance from Luzon.

It was then time for the Luzon suite to get underway, beginning with Altang Dausig of the Mangyan from Mindoro chanting an Ambahan, or traditional poetry.

This was followed by the Kami ang Kaigorotan Performers from the Cordillera who presented a poetry-song piece that reminds the youth that unity is the key to achieving peace.

The Aetas of Central Luzon followed showcasing their culture with “amamogis,” taken from the traditional dance Talek.

The highlight of the night was the exchange of messages between UPD Chancellor Michael L. Tan, Sandugo co-chairs Joanna Carino and Jerome Sokor and Kalumaran Chair Datu Monico Ayo.

The lakbayanis also presented Tan with tokens of gratitude for supporting and hosting Lakbayan 2017 consisting of a kudlung, the traditional 2-stringed Lumad instrument and a wood carving depicting Tan as a warrior doctor.

Sokor and Carino thanked the UPD community and Tan for the warm welcome they received since their arrival.

Carino made special mention of the health professionals who attended to the needs of the lakbayanis. 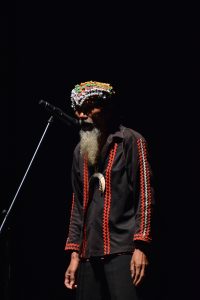 Popular folk artist and lumad Bayang Barrios capped off the night with a stirring performance; she was later joined by the other lakbayani performers on stage.

Hugpungan 2017 is the second iteration of the concert. The first was on Oct. 26, 2016 also at the University Theater in celebration of Lakbayan 2016.