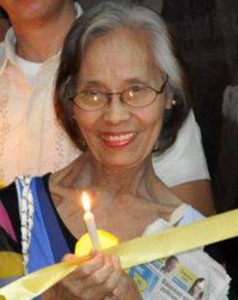 Alfonso joined the then Institute of Mass Communication in 1965 as a faculty member, and served as Acting Institute Secretary from 1967 to 1969.  The institute was elevated to college status in 1988.

Alfonso was a professor under the Department of Communication Research until her retirement in June 1996.

She earned an AB English degree from UP in 1951. She obtained her MA and PhD Communication degrees from the University of Pennsylvania in 1971 and 1992, respectively.

According to CMC, Alfonso’s cremated remains may be viewed at the Ascension Chapel of Claret Church, Mahinhin St., UP Village, Quezon City starting today.  The college announced that a necrological service will be held for the late professor on Aug. 14, 2 p.m., at the same chapel.  —With reports and image from the UP College of Mass Communication