Gauging the risk on heritage sites 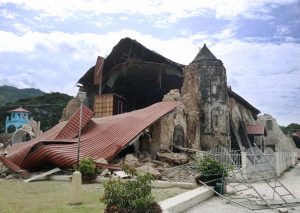 The facade of the Church of San Pedro Apostol in Loboc, Bohol collapsed after the earthquake in 2013.

In October 2013, a magnitude 7.2 earthquake struck Bohol, killing 28 people and destroying some of the country’s oldest and most iconic churches, including the Church of San Pedro Apostol in Bohol and the Basilica Minore del Santo Niño in Cebu.

While no one could have predicted, much less prevented the earthquake, the incident highlighted the need to strengthen disaster risk reduction plans for heritage sites, including analyzing the risks they face.

Jamie Mackee of the University of Newcastle’s Faculty of Engineering and Built Environment proposed a solution: the Cultural Heritage Risk Index (CHRI), a method of measuring the level of risk faced by a heritage site.

He presented the mechanics of the CHRI during his keynote lecture at the Sustainable Built Environment 2016 (SBE 2016), a conference hosted by the UP College of Engineering (COE), UP College of Architecture (CA) and UP School of Urban and Regional Planning (SURP).

Hazard Analysis quantifies the physical characteristics of hazards, Exposure Analysis identifies and maps underlying elements at risk of exposure, Vulnerability Analysis assesses the degree of susceptibility to which elements at risk are exposed to the hazard.

The last step, Risk Analysis, synthesizes the previous steps and determines the resulting losses as a function of return period or as an exceedance probability, which will eventually lead to the heritage site’s CHRI, a number from 1 to 10.

The higher the CHRI of a heritage site is, the more at risk it is to the effects of climate change and disasters.

By assigning a definite value to any given heritage site, the CHRI allows stakeholders (like local government units) “to assess and assign a value to the potential risks to that particular piece of heritage. Look at this as a tool to deal with and prioritize work that can be done on the built environment,” he said. 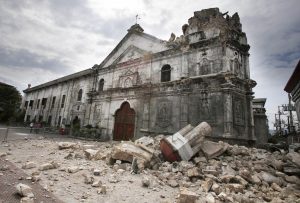 The CHRI is useful in cities like Manila that has multiple heritage sites within its jurisdiction.

The Index also takes into account aspects of two among the 17 sustainable development goals (SDGs) set by the United Nations in 2015: “strengthen efforts to protect and safeguard the world’s cultural and natural heritage” and “strengthen resilience and adaptive capacity to climate-related hazards and natural disasters in all countries.”

SDGs are a set of global goals to end poverty, protect the planet and ensure prosperity for all as part of a new sustainable development agenda, adopted on Sept. 25, 2015. Each goal has specific targets to be achieved over the next 15 years.

SBE 2016 was held from Jul. 13 to 15 at the Acacia Hotel in Alabang, Muntinlupa. The conference carried the theme “Sustainable Built Design” and is part of the Sustainable Built Environment series, the pre-eminent international conference series on sustainable building and construction.

Over 60 technical presentations were conducted on the following key topics: Sustainable Buildings Infrastructures, and Communities; Energy Efficiency and New Sources of Energy; Water Efficiency and Management; Materials and Resources; Disaster Risk Management and Business Continuity Planning; and Governance and Regulation.

This is the second SBE jointly hosted by the COE and the CA; the first was in 2013 entitled “SB 13 Manila” co-hosted with the Mapua Institute of Technology.