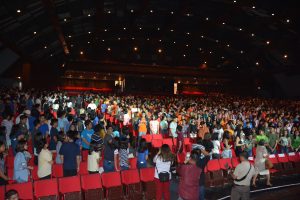 The freshmen for AY 2017-2018 at the Freshie Welcome Assembly held at the University Theater on Aug. 7.

(AUG. 18) —Spectacular song and dance numbers from UP Diliman (UPD) performing groups, inspirational messages from university officials, enthusiastic introductions from the college deans and a fierce display of academic freedom by the student council and student activists welcomed the new batch of Iskolar ng Bayan at the “Freshie Welcome Assembly 2017” (FWA) on Aug. 7 at the University Theater.

The FWA is a yearly tradition organized by the Office of the Vice Chancellor for Student Affairs (OVCSA) to familiarize new freshmen with the administration officials and treat them to a showcase of best performances from UPD’s homegrown talents.

At noon, hundreds of excited freshies lined up at the University Theater lobby to attend their first UPD event. They were welcomed by members of various student organizations who handed flyers, freebies and survival kits.

While waiting for the program to start, broadcast talents of DZUP 1602, UPD’s official radio station, announced their program line up and engaged the punctual freshies to a game where participants were asked to play the longest “Happy Birthday” greeting with a twist—instead of “Happy Birthday,” they were asked to say “Kasali Ka!” which is DZUP’s tagline. 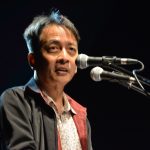 As soon as everyone was seated, FWA’s ever perky emcee, Dr. Vanessa Lusung-Oyzon, a College of Education faculty, announced the entrance of the college deans and university officials, Vice President for Administration Nestor G. Yunque and UPD Chancellor Michael L. Tan.

This was followed by the singing of the National Anthem with the accompaniment of the UP ROTC Band under the baton of John Vincent E. Burgos.

Yunque delivered the message on behalf of UP President Danilo L. Concepcion who had a prior commitment that day. The President, however, was able to catch up a few minutes later and gave his inspirational message to the freshies.

Meanwhile, the Chancellor, greeted the freshmen and gave 10 tips to survive college life at UPD.

Tan’s advice to the freshies are:  1) Eat right; 2) Get enough sleep; 3) Keep moving by doing more exercises since a healthy body is the best way to develop a healthy mind; 4) Use or set deadlines; 5) If things don’t work out, take a break; 6) Express yourself and get wacky sometimes; 7) Cultivate and nurture new interests and develop your passion; 8) Laugh often and spend less; 9) Love much and 10) Live well. 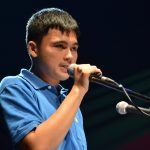 VSB student Jason Dwight S. Catindig speaking on behalf of the freshmen at the FWA.

The Chancellor also reminded the freshies, to not “get illusions of saving the world. Begin with small things including knowing what your values are, becoming a mabuting tao rather than just being mabait na tao. At the very basic level, it’s learning to be kind, gracious and considerate.”

Meanwhile, the UP President said “I hope that your desire to be in UP is sustained throughout your stay with us and this desire is matched by diligence and passion in pursuit of your studies and other experiences that will contribute to your holistic growth as productive members of society.”

He assured the freshies “I can tell you for certain that you can expect to live some of the best years of your life in this university because of our traditions of liberal education and academic freedom. I assure you that this is a place where you are free to express your views and open countless interactions with people from different walks of life.” 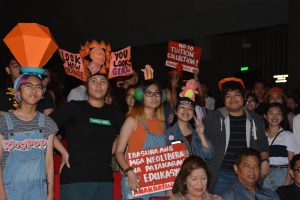 College of Fine Arts freshies wearing their headgears at the FWA

“UP Diliman is a flagship campus. It has the biggest student population, the most number of degree programs,” he said. “Make the most out of being here. Engage in conversations and constructive discussion with people from different backgrounds. Learn from them as they learn from you,” Concepcion added.

Halfway through Concepcion’s speech, a group of student activists with raised fists began to shout “Socialized tuition scam, ibasura!” They also held placards with statements like “No to Tuition Fee Collection,” “No to Socialized Tuition Scam” “Junk STS” and “Free Education Now!”

Speaking on behalf of the freshmen was Jason Dwight S. Catindig from the Cesar E.A. Virata School 0f Business (VSB). 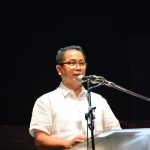 The freshmen were later introduced to the UP President and UPD chancellor and other officials by the respective deans of the colleges.

With great pride and in high spirits, the college deans introduced their respective freshmen who responded in thunderous claps and deafening cheers while waving either flags, balloons and/or placards.

VSB had the most number of freshmen who attended the FWA followed by CoE.

The event was made more exciting with impressive performances from Overduo, the guitar duo from the College of Music, UP Streetdance Club, UP Pintinig, a university-wide singing organization formed in 2015 under the baton of Benedict Justin Velasco; UP Filipiniana Dance Group, UP Dancesport Society, UP Concert Chorus, under the baton of CM Professor Janet Sabas-Aracama, and the UP Varsity Pep Squad.

Prof. Jerwin F. Agpaoa, vice chancellor for student affairs, delivered the closing remarks. The program culminated with the singing of “UP Naming Mahal.”