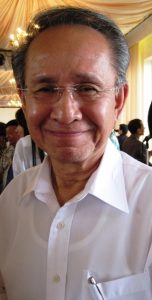 (OCT. 10)— Former UP College of Mass Communication dean Luis V. Teodoro is among the six journalists who will receive this year’s “Titus Brandsma Freedom of Press Award.”

Titus Brandsma Award (TBA) is a biennial recognition for outstanding media and communications practitioners given by the Order of Carmelites in the Philippines. The award was named after Blessed Titus Brandsma, a Carmelite priest, noted writer, journalist  and educator martyred in 1942 in Nazi Germany’s Dachau Concentration Camp for defending the right to freedom in education and for the Catholic Press.

According to  Center for Media Freedom and Responsibility (CMFR)’s announcement, Teodoro is recognized for being “a journalist, editor and journalism educator whose incisive critiques of Philippine media have inspired generations of media practitioners and scholars. Many of the latter are now established journalists, editors and media scholars who, in turn, imparted to their audience and students, the ethical principles and the professionalism of the craft of journalism that they have learned from Luis. His sharp analyses in his columns often step on the interests of the powerful and the mighty, and necessarily so as the overall thrust of his media advocacy is a democratized access to information for a learned society.”

Teodoro is a retired journalism professor at the UPCMC. He is also a CMFR board member and currently writes political commentary for BusinessWorld. In 2015, his book “Vantage Point:  The Sixth Estate and Other Discoveries” published by the UP Press won as the Best Book for Journalism in the 34th National Book Awards.

The awards will be formally given to the recipients in a ceremonial dinner on Oct. 28 to be held at the SM Skydome, North EDSA, Quezon City. Each awardee will also receive a trophy sculpture of Blessed Titus Brandsma designed by National Artist for Sculpture Napoleon V. Abueva.—Haidee C. Pineda with reports from CMFR