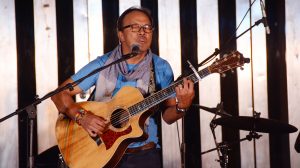 Concurrent with the theme “Salaysayan: K’wentong Bayan, Kaalamang Bayan” of the UP Diliman Month 2017, two artists serenaded the UP community for the two-part Himigsikan 2017 held at the University Theater Canopy, 6 p.m. of Feb. 10 and 24.

Known for their brand of alternative music, Noel Cabangon and Bayang Barrios rendered songs anchored on folk lore, narratives and experiences on Feb. 10 and 24, respectively. The songs centered mainly on social issues, the lives of ordinary Filipinos, struggles of indigenous peoples, love, hope and the challenges of the present generation.

The guitar-strutting Cabangon performed his hit songs, most notably “Kanlungan” and “Kay Ganda ng Ating Musika,” a remake of a Ryan Cayabyab original. Cabangon, a former member of the folk-rock group Buklod, got the audience singing along with an Aegis medley together with his three-man band.

Barrios, a proud Manobo from Agusan del Sur, performed her trademark songs, such as “Harinawa,” “May Bagong Umaga” and the 2003 Metropop Song Festival winner “Malayo Man, Malapit Din.” Known by the current generation as the voice behind the theme songs of Encantadia, a popular fantaserye, Barrios granted the request of a 3-year old fan to sing the original sound track from the series. Accompanying her was the Naliyagan Band, a musical group she formed in 2016. 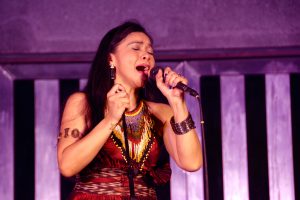 Himigsikan is a portmanteau word of “himig” (melody or tune) and “himagsikan” (revolution). It was formerly held at the Carillon Plaza on Sundays of Feb. as a stage for different genres and styles of music.

Himigsikan was first held in 1999 as UPD’s free musical offering for its community. It drew inspiration from Concert at the Park, a free show regularly held at the Luneta Open Air Auditorium.