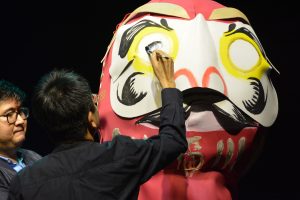 Tan paints the right pupil of the daruma doll, marking the start of celebrations.

(FEB 23)—It is good night when the spoken word meets dazzling dance numbers and a multi-awarded artist is given tribute by UP Diliman’s highest official.

The festival formally opened with a celebration of the body in Philippine pop culture in “Seremonya ng Pagbubukas: Karanasan ng Kat(h)awan,” staged Feb. 9, 6 p.m. at the UP Lagoon.

Highlighting the experience of the body as an object of pleasure and desire, the ceremony began with “Hardin ni Adan,” a spoken word piece on misogyny and chauvinism by Dzeli del Mundo, which was immediately followed by the all-male entertainment group Masculados Dos who sang a medley of their hits.

Each number was designed as a conversation, taking encounters of the masculine, queer and feminine gazes in popular novelty songs and having spoken-word performers respond.

After the number, Prof. Jem Javier of the College of Social Sciences and Philosophy (CSSP) and festival co-project leader introduced Ka(th)awan, a 3-month Festival of Culture and the Arts that runs from February to April.

The festival seeks to understand the Filipino body as a creative realm and a locus of scholarly discourse—what it is, how it is perceived and shaped by art, culture and society and manipulated by social engineering and advertising.

To symbolize the start of festivities, the right pupil of the eye of a giant daruma doll was filled in. A daruma doll is a popular talisman of good luck in modern Japan. Often made of paper mache, one eye is filled at the start of an endeavor and the other is filled in at its end.

“Tutuldukan natin ang isang mata to mark the beginning of Ka(th)awan. Beyond April, we start with Diliman Arts Month and we have many activities. We intend to use the theme of the body all the way up to October when we will hold our first Diliman science and technology month,” said UPD Chancellor Michael L. Tan. 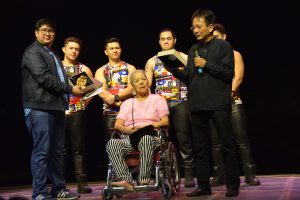 A tribute. The highlight of the night was a tribute to famed writer, painter, playwright and publisher Gilda Cordero-Fernando.

Instead of the usual plaque or certificate of appreciation, Tan named examples of her varied works, some of which were the play “Umaaraw, Umuulan, Kinakasal ang Tikbalang,” “The Best of Lola Basyang: Timeless Tales for the Filipino Family,” “Luna: An Aswang Romance” and her column for the Philippine Daily Inquirer entitled “Forever 81.”

“Name it: children’s book, cookbook, memoir, short stories, poetry—it seems Gilda has written it. Gilda is best described as an artist and the arts’ gift to the social sciences. The artist’s eye, the artist’s muse has allowed her to see what many of us don’t or can’t see. Others see but don’t dare look. Gilda dared to do that not only that and I speak now as someone with the privilege of Gilda’s friendship. Gilda listens in the way described by the Filipino: “pakinggan” which is listening with the other senses and with the heart,” he said.

Tan also described two of her works as transformative: “The Soul Book: Introduction to Philippine Pagan Religion” (1991) and “The Body Book” (1993) antedating “all the fancy social science stuff that come up on the anthropology of the body and sociology of the body.” 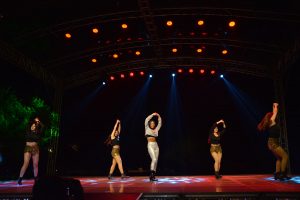 “The Body Book” in particular “made us dare to admit that we think about bodies all the time and yet often dare not look at it and name its parts. Gilda challenged us to look [at] and to name the Pinoy body,” he said.

“The Body Book” also served as a primary inspiration for Ka(th)awan.

Tan then presented her with several gifts, a copy of “Pasyal: UP Diliman Art Trail,” a calendar from UP Baguio, a copy of the UPD Journal and a Sheela na Gig made by Agnes Trillano.

A Sheela na Gig is a figurative carving of a naked hag or crony displaying an exaggerated vulva. They are architectural grotesques found on churches, castles and other buildings. They are positioned over doors or windows to protect the openings and ward off death and evil.

Fernando was then regaled with a dramatic reading of her 1994 autobiographical essay “Growing up Woman” by Missy Maramara and interpreted through dance by Kare Adea.

After the tribute the night’s revelry continued with a performance of “Lipstick” by Verlin Santos followed by “Nakaka-“ by the Masculados Dos and del Mundo.

But it was the Sexbomb Girl Medley by Rochelle Pangilinan of the SexBomb Girls and the response of Verlin Santos that generated the most spirited reaction of the night, with the crowd cheering to “The Spageti Song” the loudest.

The opening ceremony was produced by the Office of the Chancellor through the Office for Initiatives in Culture and the Arts (OICA).