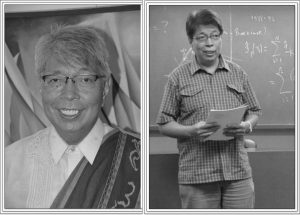 (FEB. 3) — UP Diliman (UPD) Institute of Mathematics (IM) Professor Emeritus René P. Felix passed away on Feb. 1 due to pneumonia and other complications. He was 70.

Felix, whose specialization is in mathematical crystallography and group theory, earned his PhD from UPD in 1980. He holds the distinction of being the first PhD graduate in Mathematics from UPD.

In the IM Facebook page, the Institute described Felix as a “a beloved professor and mentor and an accomplished researcher. Through his classrooms have passed hundreds of students professing the greatest of admiration for his inspired and inspiring teaching. He contributed profoundly to Mathematics research in the country through his publications in group theory, particularly in the fields of mathematical crystallography and color symmetry, attracting and mentoring several generations of students to do research in these fields, for which he received the highest recognitions and accolades from students, peers, the University, and professional bodies here and abroad.”

Felix served as Chairman of the then Department of Mathematics from 1986 to 1990. He also served as president of the Mathematical Society of the Philippines, editor of Matimyas Matematika and president of the UPD Mathematics Foundation, Inc. Upon his retirement in 2016, UP bestowed upon Felix the rank of Professor Emeritus for his “exceptional achievements and outstanding service.”

For his numerous researches in mathematics, Felix received numerous academic awards, among them the Outstanding Young Scientist Award in Mathematics from the Department of Science and Technology-National Academy of Science and Technology (DOST-NAST) in 1987; the UPD Gawad Tsanselor para sa Pinakamahusay na Guro in 1992, 1996 and 2004; the 1999 National Research Council of the Philippines Achievement Award in Mathematics; Prof. Ernesto Santos and Prof. Remedios David-Santos Meritorious Service Award in 2009; and the UP Scientific Productivity Award in 2011 and 2014.

UP Dliman Institute of Mathematics