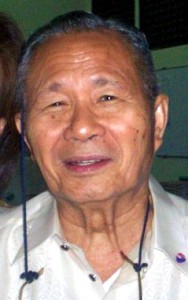 (MAY 20)—The late eminent anthropologist, scholar and UP rofessor Emeritus F. Landa Jocano will receive the Dangal ng Haraya, the National Commission for Culture and the Arts’ (NCCA) highest honor, on May 22 at the NCCA Building in Manila.

Jocano, who passed away last Oct. 27, is recognized for his contributions to cultural and historical research.  He is best known for his pioneering works in the field of Philippine anthropology, the most notable of which was his documentation and translation of the Central Visayan folk epic “Hinilawod.”

The UP Asian Center (AC) credits him for building the scholarship on cultural anthropology in the Philippines and spearheading the creation of the Philippine Studies program.

The Dangal ng Haraya is given to Filipino artists, cultural workers and historians, artistic or cultural groups, historical societies, institutions, foundations and councils in recognition of their outstanding achievements and significant contributions to Philippine culture and arts.

Prof. Felipe Jocano Jr. of the College of Social Sciences and Philosophy Department of Anthropology will accept the award on his father’s behalf.  Meanwhile, Dr. Carolyn I. Sobritchea of the AC., F. Landa’s long-time colleague and former student, will introduce the honoree’s bodies of work and achievements at the awarding ceremonies.—image courtesy ofhttp://xiaochua.files.wordpress.com/2013/02/05-ang-antropolohista-na-si-felipe-landa-jocano-2007-07-09.jpg;

The university-industry connection and sustainable development