Eye-opening start for Christmas in Diliman 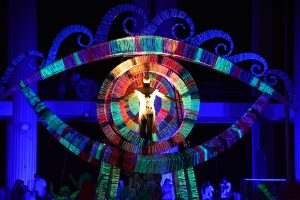 (DEC. 1)—Holiday celebrations is now official in Diliman with Pag-iilaw 2017, the annual ceremony where all the Christmas lights on campus are lit up for the first time followed by a mini-concert.

This year the theme is “Paaralan, Palaruan” inspired by “Homo Ludens: A Study of the Play Element in Culture,” a book written in 1938 by Dutch historian and philosopher Johan Huizinga.

Faculty, staff, students and families gathered at the Oblation Plaza as early as 6 p.m. for the program’s first part. The UP Staff Chorale, under the baton of Chris M. Reyes and with College of Music professor Agot Espino on the piano, sang a medley of Filipino Christmas songs.

UP President Danilo L. Concepcion then addressed the UPD Community, saying the Oblation will serve as a guide in living the principles of honor and excellence.

After Concepcion’s message was a special number by Marynor Madamesila, a College of Arts and Letters student, and the UP Rondalla’s rendition of the songs “Bawat Bata” by the APO Hiking Society, “Paraiso” by Ryan Cayabyab and “Kaniyang Sayaw” by Marie Jocelyn Marfil.

The UP Dance Company paid tribute to the innocence of childhood in the next segment entitled “Gunita ng Kabataan,” choreographed by creative director Maria Elena Laniog.

Vice Chancellor for Community Affairs Nestor T. Castro then took to the podium to talk about the rest of UPD’s Christmas activities.

For the main event, UP Integrated School student Eunice Ruivivar accompanied by Castro, Concepcion and Tan went to the center stage.

After Ruivivar delivered a rousing reading of “Pasko Na!” by Benigno Zamora, she and Castro released a live dove into the sky, signaling the lighting of the campus.

At the same time the UP Bikers and Skateboarders performed around the Oblation Plaza, dazzling the audience with their tricks and skill as they drove up and down pre-installed ramps.

Mulat. And for the first time “Mulat,” the lantern-installation art designed by UPD alumnus and artist Toym Imao was revealed to the public.

Imao said the Oblation is set amidst a representation of a giant eye, woven with colorful thread representing the diversity of visions and ways of seeing. It is meant to absorb light and radiate it back to illuminate, an effect achieved with the use of black light.

Similarly woven threads in the shape of children playing were installed on the grass in the middle of the Oblation Plaza representing visual metaphors of children “who exist in memories, those who are no longer with us, young people caught in the crossfires of senseless ‘wars’ and conflict,” Imao said.

“The University as an entity that watches over its people serves as an oculus for critical thought and initiates movements that are both game changers or just actions that level the playing field against threats to our society and those who do not play fair,” Imao concluded.

This is the third straight year that Imao created a lantern-installation for the year-end celebrations. His first work was “Sulo” (2015) while his second was “Budyong” (2016). 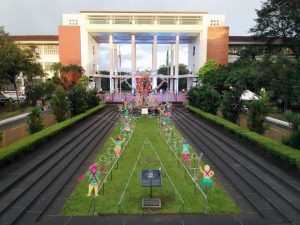 “For the past weeks, several civil actions were launched to prevent the trampling of the people’s inherent rights. There is a persistent call towards the fight to protect and preserve freedom. ‘UP players’ are trained and have the knowledge and skills necessary to overcome new conflicts and defend the right to life and to live,” Tan said.

The ceremony was followed by a mini-concert by rock band Sandwich, who sang several of their best known songs before the worsening weather cut the performance short.

For other Christmas activities, please read the December 2017 edition of Ugnayan, the events calendar of UP Diliman.