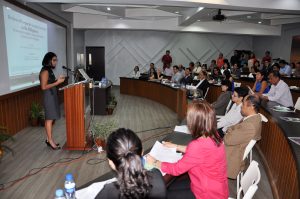 Quimbo while delivering her lecture. (Photos courtesy of Bong Arboleda of UPSIO.)

Lowering of corporate income tax from the current rate of 30 percent to 25 percent can further promote domestic and foreign investments in the Philippines, said UP School of Economics (UPSE) professor Dr. Stella Luz A. Quimbo.

Her proposal is based on the results of her research “A Review of Corporate Income Tax Policy in the Philippines: Do investments respond to taxation and incentives? Evidence from the Philippines” which was the result of her UP President Edgardo J. Angara (UPPEJA) Fellowship Award in 2015.

In a lecture held June 15, Quimbo presented a report by the World Economic Forum in 2015 which showed that two top problematic factors faced by investors considering the Philippines were complexity of tax regulations and tax rates.

“At 30 percent, our corporate income tax (CIT) rate is the highest in the region, where the average CIT rate is 23.1 percent,” Quimbo pointed out. Singapore has the lowest corporate tax rate of 17 percent, Thailand has 23 percent and Indonesia 25 percent.

According to the United Nations Conference on Trade and Development (UNCTAD), the Philippines received a record-high US$6.2-billion worth of foreign direct investments (FDI) in 2014. However, UNCTAD also showed that the Philippines paled in comparison to what its neighbors brought in that same year – Singapore had US$67.5-billion worth of FDI, Thailand US$12.5 billion and Indonesia US$22.5 billion.

At least seven measures were filed in both houses of the 16th Congress (two in the Senate and five in the House of Representatives) to correct this situation by lowering the CIT rate to a competitive 25 percent.

Quimbo’s research, which used flexible accelerator models to assess the responsiveness of industry investments to changes in tax rates and incentives, seemed to validate such proposals. The analysis used data from the 2009 and 2010 Annual Survey of Philippine Businesses and Industry covering 27,575 and 29,271 firms, respectively.

Based on her modeling, every percentage point increase in the statutory corporate tax rates projected an estimate of up to P22-billion decrease in the country’s gross capital formation or loss of possible job-generating opportunities in the Philippines. Conversely, every percentage-point reduction in the CIT rate estimates an increase of up to P33 billion in investments.

Considering all other factors such as revenue loss and possible increase in investments, the study showed that a 5 percent reduction in CIT would still result to a conservative revenue gain of at least P6.7 billion. 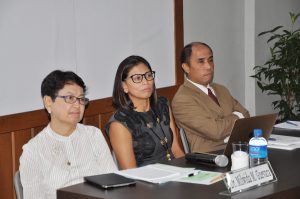 Her second suggestion is to “accompany the lowering of CIT rates with other measures such as simplifying the complex tax regulations.” At present, business are paying at least six forms of taxes – CIT, final (withholding) tax, value-added tax (VAT), excise taxes, customs duties, local taxes and other taxes such as fringe benefits tax, documentary stamps tax and percentage tax.

The last suggestion is to rationalize fiscal incentives such as choosing to give more subsidies to sectors which are investing more such as those in the Information and Communication sector. Subsidies from special economic zones should also be maximized since many economic zones are already identified all around the country.

Guevara, after narrating the history of tax reform since 1986, said that the study provides empirical support to tax legislations being proposed in the Congress. She cautioned, however, that reduced CIT rates alone will not encourage new investors. For his part, Reside pointed that the study did not dwell on other incentives given by various government agencies. He also suggested that further studies could include other factors, particularly in the local area, such as level of development, infrastructure and functional literacy, as well as other risk factors.

Former UP President and Senator Edgardo J. Angara also shared some insights regarding issues in taxation and how the government can benefit from Quimbo’s study.

The UPPEJA or PEJA Fellowship Award was established during the 1,236th meeting of the UP Board of Regents on Sept. 29, 2008 in honor of PEJA who served as UP President from 1981 to 1987 and concurrent UPD Chancellor from 1982 to 1983. This is a single and unique grant in the UP system, as well as the largest in terms of amount.

The PEJA Fellowship aims to promote high level policy discussions and research on a wide range of topics that address national development goals and imperatives such as science and technology, economic development, environment and climate change, good governance and communications.

It is open to all UP faculty, lecturers, professor emeriti and researchers. Angara Fellows are required to present their research output, hold lectures, workshops and seminars, and engage other scholars, policymakers and the business community in discussions of national significance.

UP CIDS and UPSE hosted the public lecture at UPSE as part of the PEJA Fellowship lecture series.