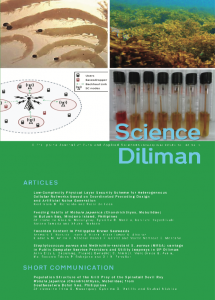 (May 9)— Science Diliman Volume 30, No. 1 (2018) is now online. Science Diliman, a Philippine Journal of Pure and Applied Science, is an awardee of the Journal Incubation Grant of the Commission on Higher Education.

The current issue features four articles and one short communication.

The paper also investigates how security can be incorporated into the downlink transmission (i.e. from telecommunications network to mobile phones) of HetNets while maintaining high cellular capacity and high energy efficiency properties. Neil Irwin M. Bernardo and Franz de Leon co-authored the article.

The article is the first study to identify swarming krills as the major food of the Spinetail Devil Ray in the study area.

The third article “Fucoidan Content in Philippine Brown Seaweeds” is authored by Jomark T. Narciso, Joyce A. Nieva, Alper James G. Alcaraz, Eladio G.M. Anino V, Norchel Corcia F. Gomez and Marco Nemesio E. Montaño. The article evaluated and determined which brown seaweeds in the Philippines has the highest content of partially purified fucoidan, a sulfated polysaccharide reported to have a wide range of bioactivities for possible medicinal applications. The study revealed that Sargassum spp., the most abundant in all sampling sites, and Turbinaria ornata, found only in 11 sites, both have significantly higher fucoidan content compared to the other samples of brown algae species.

The paper studied the prevalence of S. aureus and MRSA in computer service providers, computer peripherals and handrails of PUJs inside UPD. The associated risk factors for contamination were also determined. S. aureus is a bacterium often found in solid objects can cause serious infections, MRSA on the other hand is a bacteria that naturally live in the nose and on the skin and is resistant or resilient to antibiotic treatments.

Meanwhile, the short communication “Population Structure of the Krill Prey of the Spinetail Devil Ray Mobula japanica from Southeastern Bohol Sea, Philippines” is related to the article on the feeding habits of Spinetail Devil Ray. The study, conducted by Masangcay, Metillo and Nishida, analyzed the size composition of krills collected from the stomach of rays from January to May 2016. The study suggests that the krill P. latifrons eaten by rays in the study area grow from juveniles to adults from January to May.

The Office of the Vice Chancellor for Research and Development will announce the availability of printed copies.