E-trikes on trial operation at UPD

By Albino C. Gamba Jr., images by Leonardo A. Reyes 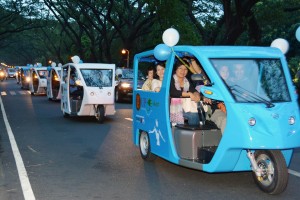 UP E-kot test run at the Academic Oval.

Ten electric tricycles are now providing transportation services around the campus on a 2-month pilot test as part of a memorandum of agreement (MOA) between UP Diliman (UPD) and BEMAC Electric Transportation Philippines Incorporated (BEMAC).

BEMAC is a subsidiary of Japanese firm Uzoshio Electric Co. Ltd. and a pioneer in the Japanese electric vehicle industry.

Dubbed as UP E-kot, the 68VM electric tricycle can accommodate six passengers and can run at a top speed of 50 kilometers per hour. It has a range of 60 kilometers on a fully charged lithium ion battery. It costs P450,000.

The 10 E-kots have been deployed to several UPD offices to serve specific transportation on campus requirements until Aug. 19. UPD Vice Chancellor for Community Affairs Nestor T. Castro said each unit is assigned at certain hours in campus offices and areas not covered by existing jeepney routes.

A unit is assigned at the Quezon Hall to do messengerial services to other buildings. One is detailed at the Campus Maintenance Office (CMO) to transport CMO personnel when offices or units need their services; another at the Office of the Campus Architect for inspection of ongoing projects; one unit is being used by the UP Diliman Police in patrolling the campus. UP E-kot units also serve students at the College of Science Complex, in dormitories, varsity teams training at night, administrative staff working overtime such as those at the Office of the University Registrar and the University Library. There are also units assigned at the residential areas such as the Area 1, Area 2, Hardin ng Bougainvillea and Hardin ng Rosas. 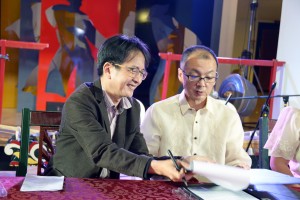 The University and BEMAC saw the need for additional transportation services especially at night which cause security concerns among UPD constituents. “We are optimistic that this collaboration with UP will provide positive results because UP is home to some of the best researchers and experts in the country,” said Palomar-Castro, who is also a UP alumna.

The two-month trial period is part of UPD’s study on environment-friendly modes of transportation. The study is being done by the UP National Center for Transportation Studies. “The vision of UPD is to go green in the next five years,” said Castro, whose office is in charge of the trial operation. Castro said the study would look at the power consumption, maintenance, and the volume of passengers, among other things. “After the trial period, we will make recommendations whether to discontinue the E-kot project or continue with it by requesting a grant from the Japan International Cooperation Agency,” said Castro.

Present at the MOA signing were UP System and UPD officials, and BEMAC officials.