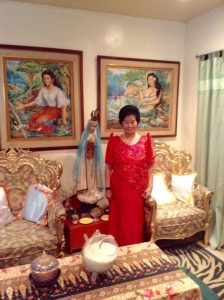 (May 21)—Dr. Ligaya G. Tiamson-Rubin, professor emerita and former chair of the UP College of Arts and Letters Department of Filipino and Philippine Literature (CAL-DFPP), passed away on May 18 due to complications from diabetes. She was 73.

Also known as Ma’am Gaying to peers and students, Tiamson-Rubin was born on Nov. 27, 1944 in Angono, Rizal. She obtained her BA Filipino in 1966 and MA in Teaching in 1971 at UP Diliman (UPD). She was a PhD in Filipino candidate from the same university.

She was a CAL faculty member from 1982 to 2009 teaching Malikhaing Pagsulat, Wika at Panitikan and Kulturang-bayan.  She was appointed as professor emerita by the Board of Regents at its 1259th meeting on Aug. 27, 2010.

Tiamson-Rubin received the Carlos Palanca Memorial Award for her works “Paano Nagsusulat ang Isang Ina?” (1981, 3rd place) and “Turning Back and Moving Back” (1980, 3rd place). In 2008, she was awarded the Gawad Paz Marquez Benitez for outstanding educators in the field of literature and communication.

According to her son, Rainier, Ma’am Gaying’s wake is at her residence at 3rd St. San Martin Subdivision, Angono, Rizal.

The DFPP will hold a necrological service for Tiamson-Rubin on May 22, Tuesday, at 3 p.m. She will be laid to rest in the morning of May 24 (Thursday).

She is survived by her brothers, sisters, two children and two grandchildren.