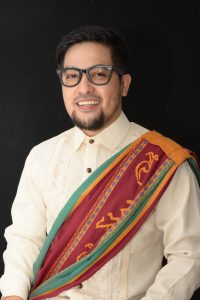 Noted food scientist and College of Home Economics (CHE) professor Dr. Alonzo A. Gabriel is one of the 10 recipients of this year’s Metrobank Foundation Outstanding Filipinos Award.

The Metrobank Foundation Inc. (MBFI) announced the winners on August 10 in a press conference in Quezon City.

A food security advocate who generously shares his innovations and research in food science and technology with micro and small-scale enterprises, Gabriel said the award validates the relevance of his and the rest of the UP community’s efforts to serve the Filipino people, particularly the marginalized sector.

“I would have not deserved this recognition without the challenge from the University to do our tripartite roles in knowledge transmission through teaching, knowledge generation through research and development, and public service through community extension works,” explained Gabriel.

Gabriel, together with three other educators, three military officers and three police officers received the award on Sept. 7 at the Metrobank Plaza Auditorium in Makati City, in celebration of Metrobank’s 55th anniversary. The winners, in conferment ceremonies, were also presented to the Philippine president during the Grand Hyatt Manila Marker Unveiling in Fort Bonifacio, Taguig City, on Sept. 5. He and his co-awardees received a trophy, a medallion and a cash prize.

The Outstanding Filipinos Award, a program of the MBFI, is a career-service exemplar in the academe, the military and the police force. The award recognizes the awardee’s services rendered above and beyond the call of duty.

In previous years, MBFI honors separately the outstanding teachers, outstanding soldiers and the outstanding police officers. This year, MBFI have put the three components search programs into one award. “We want to further highlight the overall contributions, inspiring stories of gallantry, innovations and sacrifices of modern day heroes and heighten general publics appreciation of these professions and the institutions they represent.”