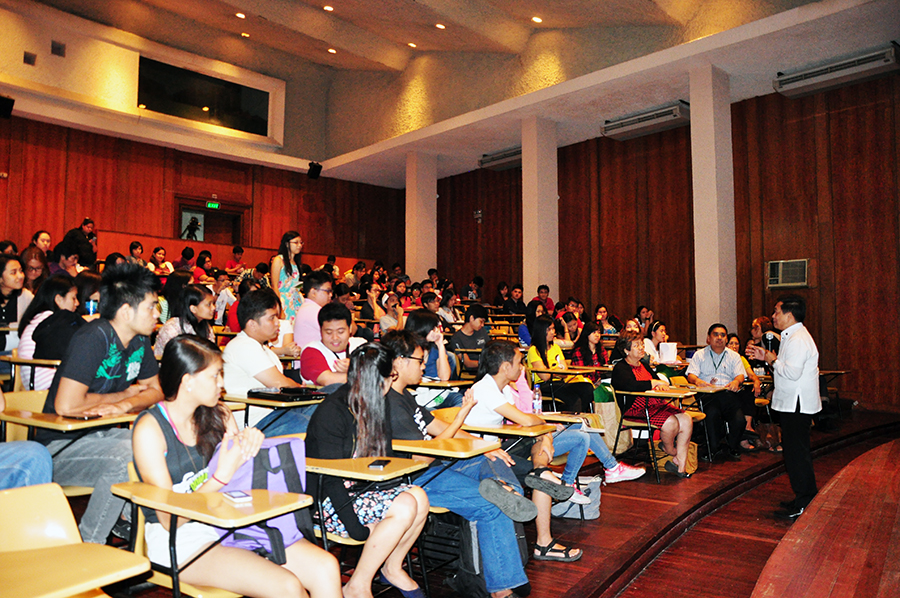 Pacheco addresses the DMAPS class during the video presentation

(DEC. 12)—Three girls stand at the edge of the Sunken Garden wearing paper hats and singing their hearts out to the melody of Taylor Swift’s “Shake If Off,” but instead of following the song’s lyrics, the three are singing about how to prepare for earthquakes.

The video is “Shake Shake Shake,” one of several videos screened at the Engineering Theater at Melchor Hall on Dec. 2 made by students enrolled in a class on Disaster Mitigation Adaptation and Preparedness Strategies (DMAPS).

The videos came from a class of 130 students from several colleges and disciplines, such as Engineering, Fine Arts, Mass Communication, Economics, Anthropology and Psychology, among others.

DMAPS is a new multi-disciplinary General Education (GE) course offered by the College of Engineering (CoE) and taught by a multidisciplinary team of six faculty members from different colleges.

The videos demonstrated, through a range of strategies and techniques, that exposure to hazards like earthquakes, storms, fire, landslides and volcanic eruptions need not turn into disasters. Instead, risks can be minimized by being proactive and focusing on prevention, rather than on reacting during and after the disaster.

Some of the other videos screened were: “Earthquake 102” which provided tips on how to survive an earthquake long before it occurs by securing furniture and fixtures to minimize risks from falling objects that could block escape routes and even cause fire.

“Deconstruct” likened romantic relationships to structures, which it stated must be built on a firm foundation and with strong but flexible materials that are not too stiff and stifling.

“Hugot” warned of the dangers of “octopus” plugs that overload electrical circuits and can cause fire. The video also reminded viewers, in a friendly and amusing manner, to always unplug their gadgets.

Storms and floods were similarly addressed. One video focused on the care of pets during storms while another translated different weather forecast signals into terms a young audience can understand.

Speaking at the screening, College of Arts and Letters dean Flora Elena R. Mirano said transdisciplinary courses like DMAPS “is the essence of what university education is in the 21st century in that [the faculty] are also preparing [students] for the life outside the academe where the disciplines must be transcended in order to live and work.”