Digong vs. the Catholic Church 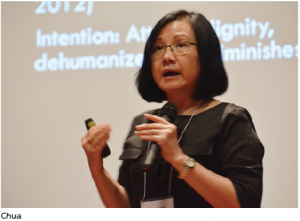 President Rodrigo Duterte is known for his colorful language and sometimes incendiary commentary, but is any of it truly harmful?

According to a 2017 study by Profs. Yvonne Chua, Maria Diosa Labiste and Maria Cristina Rara of the College of Mass Communication, 13 of the speeches Duterte made against the Catholic Church can be classified as “hate speech,” according to their analyses.

Hate speech. Harvard professor Jeremy Waldron defines hate speech as “abusive, insulting and demeaning and stirs up hatred vs. individuals or groups.” The intention of such language is to attack the dignity as well as dehumanize and diminish its targets.

“We decided to look at presidential rhetoric because of the publicness of presidential speeches. We classified it as rhetoric kasi yung speech niya deliberately strategical para mag-communicate ng message with a particular intent or motive,” Chua said.

For each of the 13 speeches, the group came up with a checklist, what they called a “hate speech framework”: the speaker; the context and content of the speech; the nature of the audience hearing the speech; the immediate response from the audience and the medium through which it was delivered.

The speaker. The first item on the checklist focuses on the speaker; on how popular and influential he is. As a president who won with a 39 percent vote share in 2016 and currently enjoys an 80 percent approval and trust rating (Pulse Asia, Oct. 2017) whose political party occupies the majority in both houses of congress, Duterte is the highest, most powerful public official in the country.

Because he represents the Filipino people, Duterte’s words carry a lot of weight and are widely circulated through all media channels.

Context and content. This item looked at the root of the conflict between two opposing factions, the patterns and keywords that constantly appear in their messages and how terrible or dehumanizing the language being used is.

The group found that one of the roots of the conflict lay with Duterte’s own experience when he attended the Catholic-run Ateneo de Davao, where he claimed to have been molested by an American Jesuit. This was compounded by the congregation’s opposition to his candidacy during the 2016 election.

In identifying the speeches to be included in study, they looked at moves by the Catholic Church that were shortly followed by a speech from the President.

Some examples of trigger events were the public opposition to the burial of former president Ferdinand Marcos at the Libingan ng mga Bayani as well as several exhibits and statements by the Catholic Bishop’s Conference of the Philippines (CBCP) criticizing Duterte’s ongoing war against drugs.

The researchers also found a pattern to Duterte’s speeches, saying that while on the surface he seemed folksy, rambling and off the cuff, upon closer examination of the text, several consistent themes and keywords emerged, the most prominent of which was that of sexual misconduct by members of the priesthood (24 thematic instances and 72 keyword instances).

The researchers also noted the repeated use of profane, dehumanizing language often in the vernacular for more impact, with “putangina” used 36 times.

“We’re not arguing with the factualness of his arguments. It’s the way he frames it and the way he uses inflammatory language to make people angry and mixes it with his own opinion and how he uses the facts,” Chua said.

“He would actually have copies of the book with him and he would distribute them. What are documented as the sins of, say, just one priest or a bishop becomes the sin of the entire institution,” Chua noted.

Part of hate speech, according to her, is the creation of an “us vs. them” narrative among those who are listening, with the “us” in the scenario being the live audiences the speeches were addressed to.

Most of the speeches selected were directed towards members of the law enforcement and local officials, frontliners in the war on drugs while the rest were delivered in front of civil servants, supportive migrant workers and sympathetic businessmen.

“In attempting to create an ‘in’ group versus a ‘target’ group, the President has issued a challenge to the Church na ‘mag-showdown na lang tayo’ at least on five occasions. You find it a lot in his speeches where he would say ‘you side with the church, you go to heaven. But side with me and we’ll go to hell together,” Chua noted.

The medium. Perhaps the most interesting aspect of the study was the medium and how well Duterte’s speeches are propagated by the state media through the Presidential Communications Operations Office (PCOO).

The PCOO is the premier arm of the executive branch in engaging and involving the citizenry and the mass media under its secretary Jose Ruperto Martin M. Andanar. According to its website, one of its functions is to “ensure that accurate information from the President and the Executive Branch is promptly and efficiently relayed, delivered and disseminated to intended target audiences.”

Since coming into power, Duterte has endeavored to revitalize and reorganize state media. Its 2017 budget amounts to P1.373 billion.

The researchers noted the efficiency in which the speeches were disseminated not only through traditional state media but more importantly, also through their newly acquired digital partners.

Chua said even before the president’s speech is over, government radio, television and online journalists are already recording it. Recordings of the event are almost immediately publicly available through their official social media channels as well as within the PCOO website.

The PCOO accredits online influencers who report on the president’s actions, the most vocal of whom are Margaux “Mocha” Uson, Sass Sasot and RJ Nieto.

With followers counting in the millions, Chua said these influencers regularly engage their audiences, often using the same kind of strong language used by Duterte to inspire reactions.

“They not only repeat the message but also add to the messages of the president when it comes to the church. Makikita niyo na nagdadagdag sila. Mocha Uson has called the CBCP the anti-Christ. The president never said that the church is behind the destabilization attempts but his DDS (diehard Duterte supporters) have repeated those messages,” she said.

“For example the president says something. Mag-uumpisa yan sa isang DDS you can see simultaneous or near simultaneous propagation of those messages.… Ang bilis. If you look at the thread, it’s a matter of minutes,” Chua added.

And as the number of people engaging in the discussion increases, reactions tend to intensify and the language being used against the church becomes harsher.

The audience. And for the most part, according to Chua, the response to the speeches were very enthusiastic. This response is repeated by his alter egos in the cabinet, the Presidential spokesperson, his partymates as well as his kin in government office, particularly his daughter, Davao City Mayor Sara Duterte-Carpio.

Counterspeech. A good way for the Catholic Church to engage the hate speech according to Chua is to fight fire with fire through counterspeech.

The Dangerous Speech Project, a network of academics, defines counterspeech as “any direct response to Dangerous Speech which seeks to undermine it. Just as influential speakers can make violence seem acceptable and necessary, they can also favorably influence discourse through counterspeech.”

Here, the Catholic Church’s influential speakers can speak out against the hate speech and engage the audience through their own channels.

The difficulty, according to Chua, is the vast difference in infrastructure and resources dedicated to information dissemination between Duterte’s administration and the Catholic Church.

The most visible example of this disparity is in the social media statistics between the two entities: The CBCP Media Office’s YouTube account has 176 videos and 1,152 subscribers, a far cry from the 10,612 videos and 51,952 subscriber base of Radio TV Malacañang’s.

With an approved P1.351 billion budget in 2018, it’s safe to surmise that the PCOO and the agencies under it will only grow stronger.

“It’s highly problematic when no less than the head of state who should observe dignity and promote understanding in his speech engages in hateful speech and enjoys immunity while in office,” Chua said.

What now? Enforcement and education are the methods the researchers proposed to combat hate speech, saying that there’s no lack “of standards for and reminders to media professionals to guard against furtherance of hate speech.”

Journalists in particular need to pay attention to professional development programs that will teach them to detect hate speech and navigate the new technologies and platforms of communication, Chua said.

Technology companies, especially those who own social media sites such as Facebook and Twitter also “have a responsibility to enforce and enhance their own policies on hate speech,” she added.

Chua said the Department of Education may also want to review the media and information literacy subject in Senior High School and the Alternative Learning System.

Another way is to establish a real public broadcasting service in the Philippines wherein the media outfit is funded by taxpayer’s money but enjoys editorial independence. Two such broadcasting outfits are the British Broadcasting Corporation and the Public Broadcasting System in the US.

The results of the study were presented at the first day of the inaugural Pi Gamma Mu National Conference with the theme, “Framing the Nation’s Narrative through the Lenses of the Social Sciences,” on October 13-14 at the NISMED Auditorium.

The conference gathered leading academics in the various fields of the social sciences who are members of Pi Gamma Mu to deliver papers on a variety of sub-themes.

Chua is also a co-founder of VERA Files, an independent mediaorganization that engages in in-depth journalism.