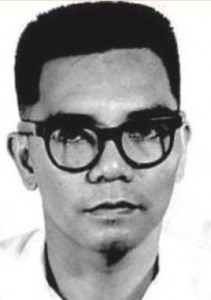 The Department of Linguistics (DL) of the UP Diliman (UPD) College of Social Sciences and Philosophy celebrated the life and work of Ernesto Constantino, avid folklorist and a pioneering figure in Philippine linguistics last Aug. 25 with “Paglingon,” a lecture series held at the Bulwagan ng Dangal.

Constantino served the university for 36 years beginning in 1959 as an Assistant Professor of Linguistics until his retirement as University Professor in 1995.

Constantino was chairman of the Departamento ng Filipino at Panitikan ng Pilipinas (DFPP) and DL from 1969 to 1972.

Torres-Yu talked about her various interactions with Constantino, vividly recalling their first interaction when she was student assistant at the department. It was also him who invited then the newly graduated Torres-Yu and Prof. Lilia Antonio to join the University in 1971.

The folklorist. Constantino co-founded the University of the Philippines Folklorists, Inc. and accumulated a good amount of Philippine folklore materials during his career.

It was in this spirit that Fabros presented his lecture “Hidilyn F. Diaz: Sulyap sa isang epiko at iba pang poklor,” in which he talked about the Olympic silver medalist, likening her story to that of an epic hero’s journey.

In heterogeneous languages such as Taglish, words and elements from the source languages remain distinct and recognizable while still being used together in writing and conversation.

She attributes her preference for using heterogeneous language for translation to Constantino’s influence.

In closing, Prof. Farah Cunanan of the DL commended Constantino’s scholarship, citing his tenacity and perseverance in gathering data despite living in an age without the benefits of very mobile technology.