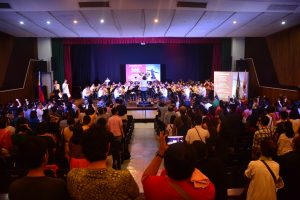 (OCT. 2) — Capping its centennial anniversary celebration, the UP College of Music staged a full house closing concert featuring its faculty and resident performing groups on Sept. 15 at the Abelardo Hall Auditorium.

Performers. UP Tugtugang Musika Asyatika (UP TUGMA) set the mood with a chant set against the background of gongs and kulintang. UP TUGMA is an organization of student-performers and enthusiasts of Philippine and Asian traditional music based at the CMu.

When the ritual ended, the UP Concert Chorus (UPCC) and UP Chorus Class, under the baton of Cyro Moral, gave an enchanting performance of “Silence My Soul” by National Artist for Music Francisco Feliciano.

Created in 1962, the UPCC is the official choir of UP and an internationally-acclaimed group that has won top prizes in major international competition, the most recent of which was the Grand Prix at the 6th International Krakow Choir Festival in Poland on June 14, 2015. The group is presently led by Prof. Janet Sabas-Aracama.

The concert officially started with the singing of the Philippine National Anthem led by the UPCC with Calvin Capacete as the assistant conductor.

Buenconsejo also said it “reflects on the College’s mission in the teaching of the art of music performance as well as inculcating research on Philippine music and dance that has impacted on Filipino national cultural consciousness.”

Closing the first part of the concert was the UP Jazz Ensemble that performed “I’ve Found a New Baby” by Jack Palmer and Spencer Williams and “The Jazz Police” by Gordon Goodwin.

Founded in 1977, the UP Jazz Ensemble is the official jazz group of the university with Prof. Raymundo Maigue as musical director. The 30-member band consisting of CMu students and alumni has repertoire ranging from known standard composers and arrangers like Duke Ellington, Glenn Miller Sammy Nestico, George Gershwin and Count Basie, as well as comtemporary composers such as Beatles, John Williams and Dave Gruisin.

After a 10-minute break, the UPCC opened the second half of the concert with their performance of “Bayan Ko” by Constancio de Guzman and Jose Corazon de Jesus and “Nais Ko” by Ryan Cayabyab and arranged by Robert Delgado.

The UP Guitar Orchestra (UPGO) also performed that night and played “Danza Del Sur” by Hansjoachim Kaps and “Allegro (Concerto in D Minor)” by Filippo Gragnani.

Founded in 1982 by classical guitar professor Lester Demetillo, the UPGO, originally called UP Guitar Ensemble, is composed of CMu students majoring in Guitar. The group has performed in various concert series and joined several competitions such as the National Music Competition for Young Artists (NMCYA).

The last to perform was the UP Symphonic Band under the baton of Prof. Rodney D.S. Ambat with orchestra pieces “Dalampasigan, Concert Overture” and “Lulay Concert March” composed by Lt. Col. Valentin Y. Mechilina of the Philippine Air Force.

The UP Symphonic Band is the official student performing arts group of UP Diliman based in the CMu. In November 2015, the band bagged the Best Performing Group Award under the symphonic band category of the Asian Composers League Festival and Conference.

Gawad Nicanor Abelardo is part of the UP College of Music Centennial Awards. Recipients of this award were selected by a search committee headed by former CMu dean Dr. Ramon Acoymo with National Artist for Music Dr. Ramon Santos and Prof. Mauricia Borromeo as members.

According to the Business World Online  article “Berlin-based violinist performs in Manila,” Guanzon-Arambulo was known for introducing Japanese musician and educator Dr. Shinichi Suzuki’s philosophy and methodology in teaching music in the Philippines and other Asian countries. She is also the founder of the Greenhills Music Studio.

Cuyugan-Asensio is a professor emeritus at the CMu Voice and Music Theater/Dance Department. According to UPCMu’s website, she is a profile singer, actress, librettist, lyricist, pedagogue, producer and director.

The concert ended on a high note with the singing of UP Naming Mahal with the accompaniment of the UP Symphonic Band.

CMU’s centennial concert was emceed by Prof. Patricia B. Silvestre and Kevin Almario, and directed by Prof. Alegria O. Ferrer.