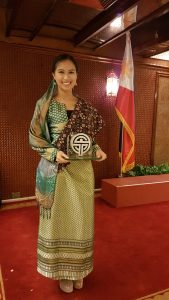 The TOSP is a prestigious award for young role models of the country which is an annual project by the RFM Foundation, Inc. in cooperation with the Commission on Higher Education. It is given to outstanding students in the Philippines who have excelled academically, exemplified leadership, have good moral values and made a difference in their respective communities, organizations and fields of interest through service.

She was part of the team who won the championship at the Industrial Engineering Competition held at the Institut Teknologi Bandung in Indonesia on Jan. 17, 2016.

She was also among the recipients of the 2016 Gawad Tsanselor award, the highest recognition bestowed by UP Diliman for excellence and outstanding accomplishment, and the Garrick Yao Memorial Award for Service.

Nocum was selected from the 30 national finalists from different universities in the country.

The awarding ceremony was held at the Heroes’ of Malacañang Palace on Feb. 9. —Haidee C. Pineda with reports and photos from Arizza Nocum