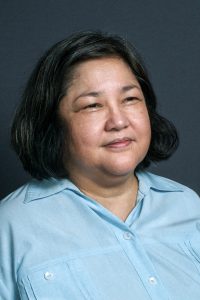 (NOV. 10)—The College of Social Work and Community Development (CSWCD) has a new dean in the person of Dr. Sylvia Estrada-Claudio.

A professor at CSWCD’s Department of Women and Development Studies, Claudio was Director of the University Center for Women’s Studies from Jun. 1, 2011 to May 31, 2014.

The author of numerous publications and a known advocate for reproductive health, among her works are “Democracy and Theocracy: Justice and Sexism. The Philippine Roman Catholic Church in the 60s and the 70s (2013), “Was I Doing Outreach or was I Standing Outside and Reaching in?” (2012) and “The War on Women’s Bodies: Religious Fundamentalisms and the Struggle for Reproductive and Sexual Rights” (2011).

She received various awards and distinctions, among the most recent are the Courage Award from the Women Have Wings Foundation (2013), the Bayi Citation for the lifetime promotion and defense of women’s and people’s rights and vigilance for genuine democracy (2010) and the UP Centennial Faculty Grant Award (July 2008 to June 2009).