CI to teach Mandarin at DFA 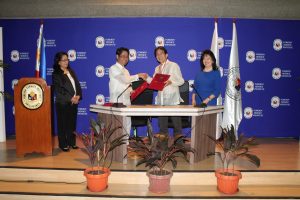 Officials and staff of the Department of Foreign Affairs (DFA) will soon be trained in Mandarin language and culture by staff of the University of the Philippines Confucius Institute (CI) with the signing of a Memorandum of Understanding between both institutions on Jan. 11.

The program, called Basic Mandarin Language and Culture Level 1-111, is a 90-hour training course comprising 80 hours of Mandarin language and 10 hours of Chinese culture. According to Institute director Prof. Lourdes Nepomuceno, “it is intended for DFA personnel and its agencies with service attaches due for assignment to Beijing, Guangzhou, Chongging, Shanghai or Xiamen. However, it is also open to those who find Mandarin relevant to their work and those who are interested to learn another language.”

The CI was established on Dec. 7, 2014 through an agreement between UP and Xiamen University and the Confucius Institute Headquarters of China “based on the shared values and visions with regard to Chinese education and cultural training.”

A similar agreement to teach Chinese language and culture to member cities of the League of City of the Philippines was signed in Oct. 4, 2016.