CI signs an MOU with CDC, SBMA and MCC 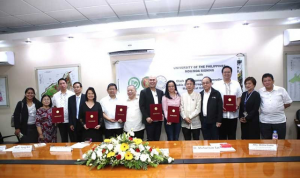 (NOV. 13)–The Freeport in Pampanga and Subic Bay Freeport in Zambales are taking additional steps to handle the influx of Chinese tourists and investors, beginning with training their personnel in the Chinese language and culture.

Mandarin lessons were part of a memorandum of agreement entered into by the Clark Development Corp. (CDC) and Subic Bay Metropolitan Authority (SBMA) with the Confucius Institute (CI) at the University of the Philippines Diliman (UPD) on Oct. 26.

The CDC was represented by its president Noel Manankil, the SBMA by its chair and administrator Wilma Eisma and UPD by its chancellor Dr. Michael L. Tan and CI director Lourdes Nepomuceno.

“To support Subic and Clark’s tourism growth, we are pursuing capacity-building initiatives to upgrade the skills of their tourism front liners. This will allow them to effectively communicate with tens of thousands of Chinese tourists visiting Subic and Clark, brought by the influx of cruise ships now calling on the Port of Subic Bay,” Nepomuceno said.

Mabalacat City Mayor Crisostomo Garbo signed a similar memorandum for a Mandarin language course in Mabalacat City College, one of the 145 League of Cities’ colleges and universities at the same event.

Since 2017, CI-UP has been conducting language training for the personnel of the Bureau of Immigration, and the Department of Foreign Affairs.  Chinese Mandarin for Managers will be offered in January-April, May-August, August-December 2019 for members of the Philippine Chamber of Commerce and Industry, Inc.