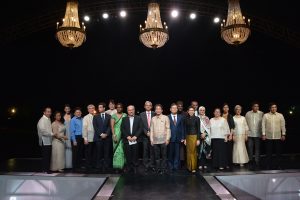 (MAY 23) — A 2-way celebration with the opening of the Linggo ng Parangal 2018 and feting UPD’s international community through the Chancellor’s International Reception was held on May 7, 6.p.m. at the Quezon Hall Lobby.

This was described by UPD Chancellor Michael Tan as a “time to honor people in UP and [their] partners.”

In his speech, Tan thanked the attending diplomats whose countries have academic and/or cultural partnerships with UPD. He acknowledged the contribution of international affiliates to the growth of the UPD student. “Their motivation will not be complete if they will not have exposure to the world,” Tan stressed.

May Zin Thet, foreign exchange student from Myanmar, shared about her stay in UP, “This experience of studying in UP […] prepares me for other opportunities and for the future.” 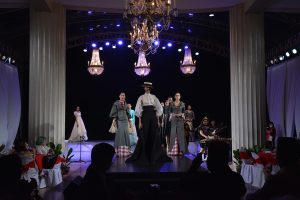 A miniature Oblation statue and a plaque of appreciation were given to dignitaries and special envoys from Chile, India, Iran, Japan, Nigeria, Sri Lanka, Thailand and Vietnam. Tan was joined by Vice Chancellor for Academic Affairs Evangeline C. Amor and Office of International Linkages Diliman (OIL-D) Director Imee S. Martinez.

Introduced in the program were this year’s Gawad Tsanselor recipients. The award is the highest honor given by UPD to outstanding sectors of its community.

The conferment rites of the Gawad Tsanselor and culmination of Linggo ng Parangal 2018 was held on May 11 at the Institute of Biology Auditorium.

A fashion show followed, featuring the masterpieces of internationally-acclaimed designer Jojie Lloren. Lloren showcased his collection of gowns and clothes inspired by styles of important Filipino painters. Tan and CHE Dean Aurorita T. Roldan presented Lloren with tokens of appreciation for his contributions to the Philippine fashion industry and display of UP’s trademark honor and excellence.

Serenading the audience during the event were homegrown UP groups UP Tugtugang Musika Asyatika’s (Tugma) and Padayon Rondalla. Bullet Dumas, a contemporary folk singer-songwriter, performed the songs Tugtog and Kapayapaan at the beginning and end of the program respectively with Tugma providing the accompaniment.

Tan remarked that the Tugma instruments were a metaphor to the international nature of the event. Tugma’s instruments consisted of the Western electronic guitar, electronic bass, and flute; Korean buk, Japanese koto and Philippine kulintang. Before the the solidarity toast that capped the night, Tan stressed “we have simple dreams: that is to make good music together.”

The program was organized by the UPD Office of the Chancellor, OIL-D, Office of Extension Coordination, CHE, UPD Festival of Culture and the Arts 2018 Core Team and the UP Diliman Information Office.