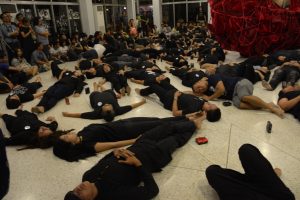 Faculty, students, staff and other guests were left enthralled after watching a hundred performers weave through the audience in choreographed rhythmic steps, in an almost clockwork pattern while holding MP3 players at the UP Vargas Museum.

The players emanated what sounded like soft raindrops, leading to rattling bamboos, climaxing into screeching insects and other assorted sounds such as those produced by gong, clappers, shells and human voices, ending in an abrupt silence with all the performers lying prone on the floor as if lifeless or in a trance.

The gathering of 100 performers on Feb. 2 was made possible by the UP Center for Ethnomusicology, in cooperation with the UP College of Music (CMu) as part of Maceda’s centennial celebration.

Maceda, who is known for his compositions that bring together the Asian and Western music, is a composer, ethnomusicologist, pianist, philosopher, multi-awarded scholar and artist. He also pioneered ethnomusicology in the Philippines.

He was conferred the rank and title of National Artist for Music in 1997.

Cassettes 100.  Maceda’s groundbreaking work “Cassettes 100” was first performed in 1971 at the Cultural Center of the Philippines (CCP) lobby with 100 participants carrying cassette tape recorders with pre-taped music and moving in a simple choreography.

“Cassettes 100” was Maceda’s first attempt at using an electronic device in his compositions, in particular, the cassette, and “taped natural sounds, as musical instruments, as well as dynamic configuring of sonic clouds as part of the musical realization,”  notes National Artist for Music Dr. Ramon P. Santos’s “Tunugan: Four Essays on Filipino Music.” 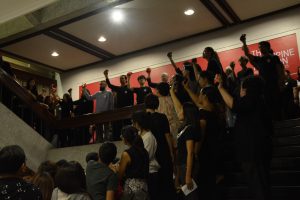 Santos further notes that Maceda was encouraged by the result of the experiment and that the work itself “symbolized the participation of local peoples in a modern technologizing world, in which the cassette tape recorder represented an easily affordable tool for ordinary ‘third world’ societies in gaining access to artificially reinforced forms of human communication.”

The concept was expanded in “Ugnayan” (1974) which consisted of prepared music aired in 20 radio stations where thousands of people with a radius of 100 kilometers from Manila played their transistor radios in parks and listened to meditative music from their transistors, according to music historian Dr. Corazon C. Dioquino’s article “In Focus: Scoring for the Filipino Life and Music.”

Fastforward to 2017.  “In the 1960s when Jose Maceda pioneered a new mode of creative endeavor with compositions that utilized Asian traditional instruments and vocal sounds, he was opening a Filipino musical public otherwise entrenched in Euro-American concert and/or popular music to an unorthodox soundworld made up of gongs, bamboo and Malayo-Polynesian vocables,” Dr. Jonas Baes, CMu professor, said.

He considers “Cassettes 100” as something that “transcends the consumerist intentions for the use of this gadget.”

Baes said, “In Cassettes 100, the machine is transformed to represent a body: that of the person holding the gadget. More importantly, this single body does not exist only for itself but represents a single strand, which along with 99 other bodies creates a complex, yet integrated ‘whole.’”

Contemplating on these ironies of the digital age, Baes said they could now see that Maceda’s “Cassettes 100” continue to teach people the valuable lessons in human connection.

“The very mode of performance ironically leads us to retract the benefits of the digital age and lead us through rigors of searching for the most appropriate gadget suitable for performance. The most advance audio equipment already available only teach us the real irony, above all ironies, is that technological development had actually disconnected us. Perhaps ‘Cassettes 100’ will remind us to reconnect,” he added.

Maceda.  Maceda, according to Dioquino, was born in Manila on Jan. 31, 1917 and received his early training in music at the Academy of Music of Manila.  With the help of music patrons and Asociacion Musical de Filipinas which was co-founded by his piano teacher, Victorina Lobregat, he was sent to Paris in 1937 for further studies at the Ecole Normale de Musique where he earned the Diplome de Virtuosite with distinction.  Dioquino’s article was published at the National Commission for Culture and the Arts (NCCA) website. 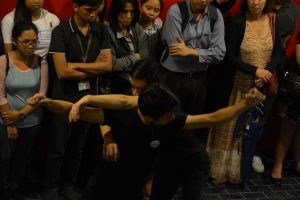 Maceda’s education at Queen’s College and Columbia University led him to his first fieldwork and first encounter with Philippine traditional music.

Dioquino also mentioned that Maceda’s initial publications, which first appeared in 1955, “are indicative of the trend of his musical thinking—The Music of Bukids of Mindoro, Hanunuo Music of the Philippines, Music—where east and west meet.”

The maestro’s compositions that were usually performed as a communal ritual, according to NCCA, were considered as “monuments to his unflagging commitment to Philippine music” were: Ugma-ugma (1963), Pagsamba (1968) and Udlot-udlot (1975).

Maceda @ 100.  Prior to “Cassettes 100,” the Center for Ethnomusicology kicked off Maceda’s 100th birth anniversary celebration on Jan. 31 with the restaging of “Pagsamba” at the Parish of the Holy Sacrifice followed by a centennial birthday dinner at the UP Executive House.

“Pagsamba” was first performed at the Parish of the Holy Sacrifice in 1968. As described in Dioquino’s article, “Pagsamba calls for a mixed group of 100 voices uttering high and low pitches in dense and thin combinations; 25 male voices grouped into fives chanting disjointed phones; 100 instrumentalists each playing on separate instruments — whistle flutes, clappers, buzzers, scrappers and sticks; and 16 gongs (eight agung, eight gandingan) which provide lower ranges as prolonged and short sound attacks.”