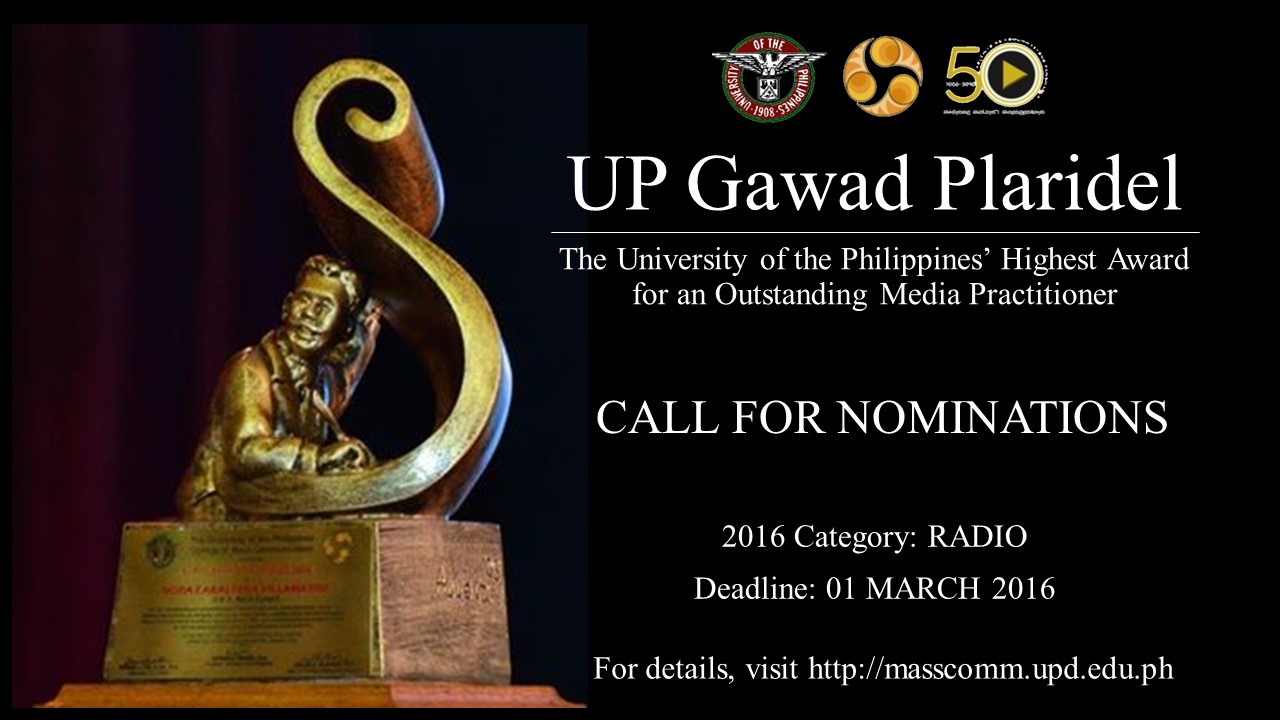 The U.P. College of Mass Communication (UP CMC) is now accepting nominations for the annual U.P. GAWAD PLARIDEL which recognizes Filipino media practitioners who have excelled in any of the media (print, radio, film, television, and new media) and have performed with the highest level of professional integrity in the interest of public service.

For 2016, the twelfth U.P. Gawad Plaridel will be given to an outstanding RADIO PRACTITIONER.

The award is named after Marcelo H. del Pilar (nom de plume, Plaridel), the selfless propagandist whose stewardship of the reformist newspaper La Solidaridad helped crystallize nationalist sentiments and ignite libertarian ideas in the 1890s. Like Plaridel, the recipient must believe in the vision of a Philippine society that is egalitarian, participative and progressive; and in media that are socially responsible, critical and vigilant, liberative and transformative, and free and independent.

Eligible for the awards are all living Filipino individuals who have excelled in the field of radio as producer, director, scriptwriter, announcer, voice actor, sound designer, sound technician, reporter, commentator, etc. Aside from their probity and integrity, these media practitioners must have produced a body of work that is marked by excellence and social relevance and must have achievements recognized nationally and/or internationally.

Individuals and institutions may nominate potential recipients. Institutions include media corporations, professional media associations, media advocacy groups, educational institutions, cultural foundations, and NGOs. Previous nominees may still be considered for this year’s award. All current full-time faculty and staff of the UP CMC are disqualified from the nomination.

The U.P. GAWAD PLARIDEL will be given in August in commemoration of del Pilar’s birth anniversary.  The awardee will receive the U.P. Gawad Plaridel trophy (designed by National Artist Napoleon Abueva) and will deliver the Plaridel Lecture addressing issues relevant to the state and practice of Philippine media.  The recipient will have a place of honor at all ceremonies and functions of the College.  The recipient’s portrait will be hung at the U.P. Gawad Plaridel Gallery located at the College lobby (Plaridel Hall, U.P. Diliman).

Nomination forms and award guidelines are available at the UP CMC Website (http://masscomm.upd.edu.ph/upgawadplaridel2016) and at the UP CMC Office of Extension and External Relations (UP CMC-OEER). Interested parties may call (02) 981-8500 loc. 2668 for further inquiries.