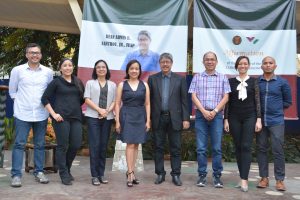 Sarthou (center) with the college executive board.

Prof. Armin Sarthou Jr. was affirmed as the 8th dean on Mar. 9 of the UP College of Architecture (UPCA) at the UPCA Auditorium as witnessed by the unit’s faculty, student and employees.

After an opening performance of UDD’s (formerly Up Dharma Down) “Tadhana” by UPCA students Adelijoy Manuel and Kirstela Pangilinan and an introduction by Cathy Saldaña-Siegel of the UPCA Alumni Foundation, Inc.

The short but meaningful affirmation ceremony was officiated by UPD Chancellor Michael L. Tan. Among those present were Sarthou’s mother, daughter and grandson.

Clad in a dark blue suit, the soft-spoken Sarthou exuded a calming aura as he laid out the plans for the next three years.

Building up. He began with a vision of every UPCA graduate being “grounded in his native history, culture, climate and environment with a fervent love of country mindful of the needs of his fellowmen and society and with the ability to design visionary structures that will possibly transform the built environment to ease us into the 21st century.”

To achieve this, Sarthou said it is necessary to review the UPCA’s current curriculum “based on an appreciation of the new K-to-12 Program and of new emerging needs.”

“Are we giving our students enough business tools to set up their practice? Are we injecting enough of the visionary perspective to allow them to radically change their landscape for the better and consistent with the fast emerging economy?” he asked.

Sarthou said the construction of a new 7-story building (Building 3) for the UPCA is now ongoing, a donation from New Golden City Builders and Development Corporation.

The new building will house the UPCA Auditorium and studio labs that “will provide much needed space for academic activities. It will feature classrooms, facilities and critic rooms and will house new faculty rooms and studios which will enhance research activity and collaboration.”

Reaching out. The UPCA Auditorium, he said, will be an important venue as the UPCA reaches out not just to its students, but also its alumni and even beyond.

“This will certainly enhance our ability to spread out missions to others via lectures and symposia for practitioners all over the country as well as the general public,” he said.

One of these activities is the establishment of an online Masters program for the UPCA’s graduates and all current architects.

“All of these new programs are intended to fill in gaps for architects who desire further study or for architecture enthusiasts to see graduate level studies in the field,” he said.

Sarthou also intends to establish an alumni desk which, aside from channeling alumni donations and fundraising for continuing infrastructure and maintenance concerns, will “take care of alumni concerns including networking and alumni staffing requirements.”

“The objective is a seamless interface with the alumni, which will allow us to tap into this wealth of resources inherent in a largely successful pool of graduates. I suspect that our alumni are just waiting in the sidelines for the opportunity to help us in our programs and initiatives,” he said. 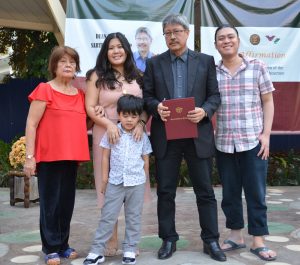 Beyond the college. Sarthou also touched on the UPCA’s role in improving the quality of life for Filipinos by strengthening its extension services.

He will make sure the UPCA will always be formally accredited as a continuing professional development (CPD) provider for architecture and landscape architecture professionals “as an opportunity to enlist as many of our local practitioners in our continuing mission to improve the quality of life of our fellow Fillipino,” he said.

New Professional Regulation Commission guidelines stipulate that licensed architects and landscape architects are required to complete 45 units of continued training/education every three years as a requirement of renewing their license. The PRC accredits the institutions that provide this training, one of which is the UPCA.

Sarthou also laid plans to collaborate with the Department of Science and Technology, the National Housing Authority, the National Center for Transportation Studies to fund research and solutions to the country’s housing, transportation and urban design problems.

At the same time, Sarthou acknowledged the work of predecessor Prof. Mary Ann Espina, who he said laid the groundwork for him to build on and continue in developing the UPCA. Espina made possible the construction of Building 3.

Sarthou was the UP Vice President for Development from 2009 to 2011. He handled the University’s concerns in the real estate property development, intellectual property and information technology. His landmark projects included the development of the UPD East Campus, the subsequent transfer of the UPIS High School Department, and the UP Professional Schools in BGC as well as the UP monorail project.

Affirmation as ritual. Having an affirmation ceremony for new deans is Tan’s innovation, who described the traditional custom of having a 10-minute oath-taking ceremony at the Office of Chancellor as “joyless.”

“I believe in the importance of rituals. Ang layunin dito is to have the new dean explain his or her program to a community so that everyone in the college becomes part of the affirmation of this new dean. So it’s not something limited to the UP Board of Regents appointing a person but everyone coming in to support the new dean,” he said.

Tan, whose religion forbids him to swear oaths, had an affirmation ceremony in October 2014 in lieu of a formal investiture ceremony.