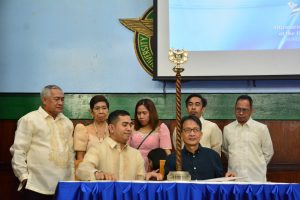 (SEPT. 5) — The UP Diliman College of Education (UPD-CEd) witnessed yet another iteration of Prof. Jerome T. Buenviaje, PhD with his affirmation as the 16th CEd dean last Aug. 30 at the Benitez Theater.

The Affirmation Rites is a tradition started by UPD Chancellor Michael L. Tan to present an incoming dean to his college constituents. It is where the dean pledges his commitment to the college, formally signs his appointment paper, and presents his programs for his unit as well as present his team or executive board. It is also a tribute to the incoming dean for his courage in accepting the post.

In her introduction of Buenviaje, former CEd Dean Dina Joana S. Ocampo shared the many “trajectories and iterations” of the new dean, who took a circuitous route to becoming a teacher, even quoting the famous saying “pagka haba-haba man ng prusisyon, sa simbahan din ang tuloy.”

She said Buenviaje journeyed through various majors and even came close to finishing college with a Secondary Education but later graduated with a Bachelor of Arts in English. 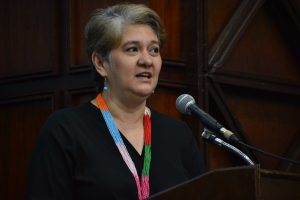 “Despite the detour to AB English, the soul searching for his purpose and true calling eventually led to education, a choice that was obviously influenced by his work experiences as a working student and by his beloved mother who was his own grade school teacher…This indeed was the trajectory towards education. It may not be a direct one but there is no discounting the perseverance that eventuality brought him to the destination of being a teacher. Wherever he worked a trajectory could be inferred,” Ocampo said.

An expert in organizational development, educational leadership and curriculum and instruction management, Buenviaje held various leadership positions prior to his stint at CEd as assistant professor.

Ocampo, former Department of Education Undersecretary for Programs and Projects, said Buenviaje rose from the ranks from being an administrative officer to classroom teacher to principal of the Holy Spirit Integrated School. Later he became a professor at the World Citi Colleges where he became the dean for teacher education, “As you can see, the trajectory iterates,” Ocampo said.

An alumnus of CEd, Buenviaje joined his alma mater’s faculty as assistant professor in 2014. He presently leads a nationwide team of researchers and educationists on an emerging model of school management and leadership. 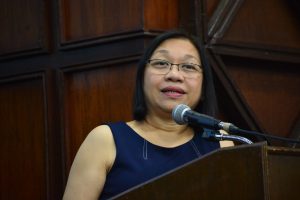 The outgoing dean had nothing but good words for her successor who she called as a man of faith and “a man who loves Eduk (CEd) and Eduk would really need that,” she said.

In her message as the outgoing dean, Bustos shared how Buenviaje sent her a text message informing her of his decision to accept the nomination in being the next CEd dean. She added he asked for her plan of action as dean because he wanted to build his plans on this.

“For any outgoing dean that was such a comforting thing to hear because I know that Jerome will have his own brand of leadership, but to be humble enough, I guess to even ask me if he could build on the plans … thank you Teacher, for doing that,” Bustos said.

She said it is with confidence that she passes the baton of deanship to Buenviaje adding, “I know you will do a great job.” 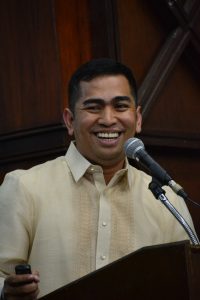 He said CEd’s presence must go beyond the UPD campus, in every professional organization both nationwide and worldwide.

Apart from the CEd faculty, Buenviaje wants to improve on students and staff welfare.

The Board of Regents approved Buenviaje’s appointment at its 1344th meeting on Apr. 29. He will serve his term until Apr. 28, 2022 and plans to steer the College through his 5-pronged goals, LIPAD. 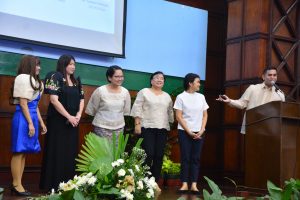 The new Dean also took the opportunity to express the College’s wish to the Chancellor for a new Education Complex to be built within CEd grounds.

Present at the Affirmation Rites apart from the CEd constituents were UPD officials that included vice chancellors, deans and other heads of units. — Mariamme D. Jadloc, images by Leonardo A. Reyes