By Anna Regidor, image by Leonardo A. Reyes 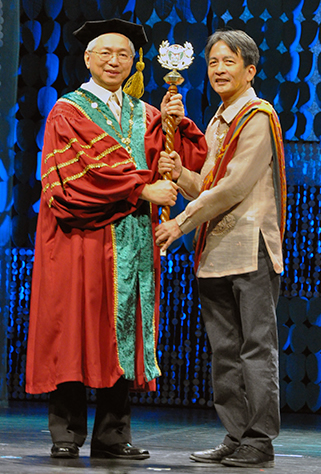 Pascual (left) ceremonially turns over the mace of UPD
to Tan (right) as part of the affirmation rites.

(NOV. 4)—Medical anthropologist Dr. Michael Lim Tan enjoined the audience present to make connections and “build bridges” as he was affirmed the 10th Chancellor of the University of the Philippines Diliman (UPD) on Oct. 17, 2 p.m. at the University Theater.

In front of a 2,000-strong audience, Tan outlined several “bridges” he seeks to create during his administration.

The mind-body gap. Tan said the university should pay as much attention to molding the physical as much as the intellectual well-being of its students, saying that a healthy mind cannot spring from a weak body.

Included in this agenda are the expansion of health financing “beyond PhilHealth and upgrading facilities of the University Health Service.”

He added that work has already begun at the student dormitories with the replacement of bedbug-infested mattresses, broken screens and windows, and “working out subsidized shuttle routes, and exploring how we can get food concessionaires to serve food that will not lead to the premature deaths of our students, faculty and staff.”

The disciplines. The second “bridge” seeks to promote transdisciplinary research among the various academic disciplines in UPD, likening these disciplines to “academic silos or islands, the result of increasing specialization in all our fields. We are an archipelago marked by academic tribalism.”

An example of one such study is the ongoing “Development of Inter-Disciplinary Signal Processing for Pinoys (ISIP) Program: Filipino Vowels and Emotions (FIVE)” or ISIP FIVE, a collaboration by experts from various colleges in UPD in an attempt to modernize and standardize Filipino language and practices.

In addition, he is establishing a Center that “will transform our general education (GE) in terms of content and process, away from domains and towards transdisciplinary approaches.”

Bridges across class. Tan said his next “bridge” seeks to tackle the increasing inaccessibility of a UPD education to poor but deserving students, citing one group of UPCAT (University of the Philippines College Admission Test) examinees from Itbayat Island in Basco, Batanes who were unable to make it to the testing center.

He cited enrollment statistics for the current semester where 42 percent of students fall under the Socialized Tuition category “ND” or “no discount” on tuition while only three percent are entitled to full discount on their tuition and other fees.

While Tan admits that the task of democratizing entry to UPD is daunting, he is determined to follow it through by creating a mentoring program in public high schools to help students get into UPD and continue with the program when the students are accepted.

Bridges to Diliman’s communities. With an estimated 70,000 households living and growing inside the eight barangays inside the 493-hectare campus proper, Tan said it was time to strengthen relations with the local communities, not through enforcement, but cooperation.

And while Tan maintained a firm stance on the informal settlers inside UPD, saying that “will not coddle squatters,” Tan also directed attention to what he called “business squatters” who have not been paying fair dues to the University for more than a decade.

“[W]e have done little to deal with business squatters who pay us rental rates dating back 20 years ago, or who have racked up arrears in payments, or who refuse to maintain their premises around public health and environmental conservation standards,” he said.

The environment. The next “bridge” links the University with its environment, citing the various projects being conducted by its various units for the Department of Science and Technology such as Project NOAH (Nationwide Operational Assessment of Hazards) and the Disasater Risk and Exposure Assessment for Mitigation (DREAM).

As for areas within UPD itself, Tan is looking into using the UP Arboretum, a 16-hectare forest area along Commonwealth Avenue, as an example of a “protected natural open space” important to UPD.

“We will re-establish UPD’s presence in the Arboretum along Commonwealth Avenue even as we set up more sanctuaries for flora and fauna here in the UP Diliman space,” Tan said.

Bridge to UP. Looking even further beyond the University, Tan outlined plans to build bridges with other constituent universities in the UP System, beginning with UP Los Baños (UPLB) and UP Manila (UPM).

Tan recently requested UPM’s College of Allied Medical Professions to expand UPD’s physical rehabilitation services, which he said “will not only benefit varsity players and musicians, but senior and not-so-senior citizens needing occupational and physical therapy.”

He is also looking into the expansion of UPLB’s animal hospital at UPD into a full-fledged veterinary research center.

Bridge to the world. While Tan acknowledges that he chose UPLB and UPM because of personal and professional ties (he is a medical anthropologist with a degree in veterinary medicine), he said there is a larger need to reach out.

“In my years here in UP I have sensed there is almost disdain for, and a fear of the world outside. We want to remain safe, and smug, in our Diliman Republic, but that means abdicating our duty to serve others, to live up to people’s expectations of UP. UP cannot be a world unto itself. We have our responsibilities as well to the world outside: Quezon City, the nation, the ASEAN region, the world,” he said.

Ceremony proper. Officiating the ceremony were UP President Alfredo E. Pascual and Board of Regents (BOR) Chairperson Patricia B. Licuanan.

Performances. Alternating with the introductions of the officials are performances from major dance and music groups in UPD.

They are the UP Cherubim and Seraphim, the UP Pugad Sayk Tiririts, the UP Tugtugang Musika Asyatika, the UP Dance Company, the UP Varsity Pep Squad, the UP Filipiniana Dance Group and the UP Singing Ambassadors.