(NOV. 27)—Books published in 2016 by Prof. Jose Wendell P. Capili, PhD of the College of Arts and Letters (CAL) and Prof. Nick Deocampo of the College of Mass Communication (CMC), won in two categories of the 36th National Book Awards (NBA).

The award is given yearly by the National Book Development Board (NBDB) and Manila Critics Circle (MCC) to the best books written, designed and published in the country. According to NBDB, the winners, except for Publisher of the Year, will receive a cash prize of P15,000. Capili’s book “Migrations and Mediations: The Emergence of Southeast Asian Diaspora Writers in Australia 1972-2007” published by the UP Press won the Literary Criticism/Literary History category.

“Eiga: Cinema in the Philippines During World War II” by Deocampo published by Anvil Publishing Inc. and was chosen as the winner in the Art category.

Capili is currently the UP System Assistant Vice President for Public Affairs and a professor at the CAL Department of English and Comparative Literature. He authored numerous poems, reviews, creative/critical essays, newspaper articles and academic papers, some of which were published in Australia, Austria, China, England, Hong Kong, India, Japan, Korea, Malaysia, the Philippines, Singapore, and the United States, including “Anagram” (Johns Hopkins University), “Ani” (Cultural Center of the Philippines), “Asian Studies: Journal of Critical Perspectives on Asia” and “At Home in Unhomeliness: The Philippine PEN Anthology of Postcolonial Poetry in English” (The Philippine PEN Poetry Anthology 2007). 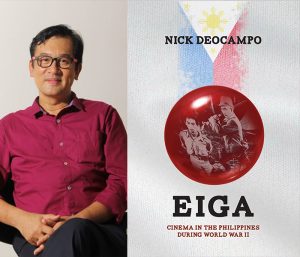 Deocampo is an associate professor at the UP Film Institute (UPFI). He is a multi-awarded filmmaker, film historian and film literacy advocate. He authored and edited several books on cinema history, some of which are, “Short Film: Emergence of a New Philippine Cinema” (Communication Foundation for Asia, Manila 1985), “Beyond the Mainstream: The Films of Nick Deocampo” (winner, National Book Award for Screenplay, 1997), “Lost Films of Asia” (commissioned by the South East Asia Pacific Audio-Visual Archive Association and published by Anvil Publishing, Inc., 2006), “SineGabay: A Film Study Guide” published by Anvil Publishing, Inc. (winner, National Book Award, 2008) and “Cine: Spanish Influences on Early Cinema in the Philippines” (Manila: National Commission for Culture and the Arts, 2003), which won another National Book Award in 2003.