Book on Aquino II and Duterte out 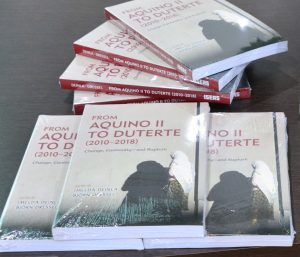 Deinla with co-editor Björn Dressel said the book, “From Aquino II to Duterte (2010-2018): Change, Continuity–and Rupture,” looks at how different Duterte’s program of change is from the past governments (particularly from former president Benigno Simeon Aquino III’s term) and the shift in regime orientation and policy preferences from Aquino to Duterte.

The 10-chapter book focuses on the implications of changes to four critical areas: politics and governance, economic governance, the Mindanao peace process and international relations. The book touches, among others, illiberal democracy, federalism, anti-corruption policies, sustained and inclusive economic growth, normalization in Southern Philippines and the West Philippine Sea conflict. 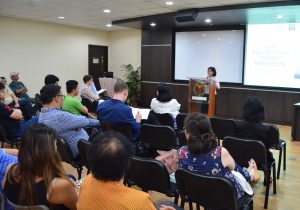 It reflects on the crucial transition between the two presidencies with Aquino representing an “important period for rebuilding and consolidating institutions of governance and accountability after two previous tumultuous administrations” and Duterte introducing “noteworthy policy changes since his inauguration.”

“From Aquino II to Duterte” is a product of the ANU Philippines Project and was launched in coordination with the University of the Philippines School of Economics (UPSE) on July 12 at UPSE.

Deinla is also a research fellow at the ANU School of Regulation and Global Governance and Dressel is associate professor at the ANU Crawford School of Public Policy (CSPP).

Present in the launch were three of the 11 chapter authors: Steven Rood, PhD, visiting fellow at the ANU College of Asia and the Pacific; Kidjie Saguin, PhD candidate at the Lee Kuan Yew School of Public Policy of the National University of Singapore; and Matthew Stephens, senior social development specialist at the World Bank in Washington D.C.

Rood discussed his thoughts on the move for federalism, Saguin analyzed the anti-corruption policies of the government and Stephens discussed the peace process in Mindanao and his concerns on the government’s failure to have a consolidated plan for socioeconomic recovery.

Other chapter authors were Aries A. Arugay, professor at the UP Diliman (UPD) Department of Political Science; Rachel Burgess, lecturer at the University of Southern Queensland; Christopher Cabuay, PhD scholar at the ANU CSPP; and Georgi Engelbrecht, who presently assists the European Union’s peacebuilding programs in Mindanao.

Completing the list are Hall Hill, Professor Emeritus at ANU CSPP; Noel Morada, director of the Asia Pacific Centre for the Responsibility to Protect (R2P), The University of Queensland; Maria Socorro Gochoco-Bautista, professor at UPSE; and Mark R. Thompson, PhD, politics professor at the City University of Hong Kong.

Present at the launch were Fidel R. Nemenzo, UPD Vice Chancellor for Research and Development; Nardia Simpson, economic counselor at the Australian Embassy in the Philippines; and Prof. Maria Ela L Atienza, chair of the UPD Department of Political Science.

The ANU Philippines Project is a joint initiative of ANU and the Department of Foreign Affairs and Trade of Australia. It aims to strengthen linkages between the Philippines and Australia in various aspects.

“From Aquino II to Duterte (2010-2018): Change, Continuity–and Rupture” (324 pages) is published by the Institute of Southeast Asian Studies (ISEAS)-Yusof Ishak Institute of Singapore. It is available through https://bookshop.iseas.edu.sg/publication/2390 at Php 1,500 (exclusive of delivery charge) or through Achievers Resource for Education (ACRE) via sammy.cudiamat@gmail.com, acre.phils@gmail.com or 552-0851. Its special launch price is Php 1,280 until July 31 via ACRE. – Benito V. Sanvictores Jr., images by Jefferson Villacruz 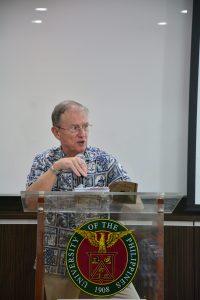 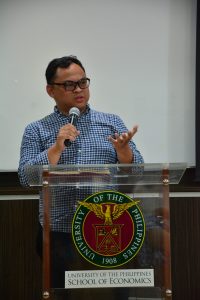 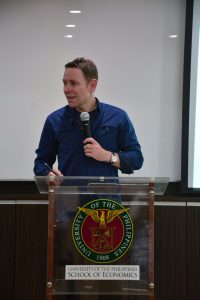