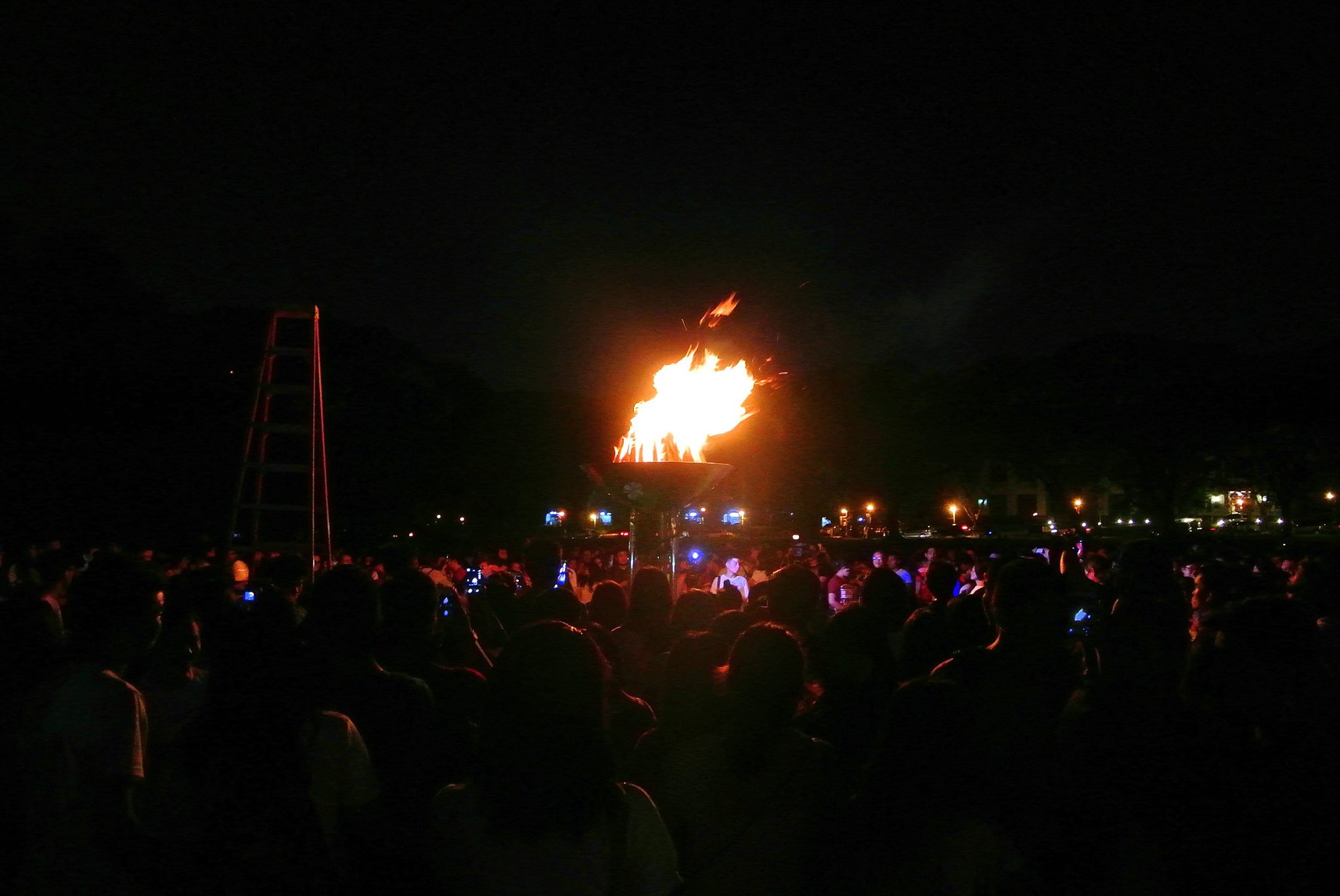 The crowd marvels at the bonfire that signifies the Fighting Maroons’ win.

(AUG. 12)—A huge crowd comprising students, professors, officials, staff and supporters celebrated  the long-awaited win of the UP Fighting Maroons Men’s Basketball Team (MBT) in the UAAP Men’s Basketball competition through a bonfire at the Sunken Garden on Saturday, Aug. 9.

Earlier, UP MBT Manager Dan Palami had publicly announced a bonfire in the event of the team’s first victory. The Fighting Maroons aced their first win in the UAAP 77th Season over the Adamson Soaring Falcons, 77-64 on Saturday at the Mall of Asia Arena. The much anticipated triumph ended the 27-game losing streak of UP MBT which played sans Coach Rey Madrid in the last two games.

Upon snagging the victory, the official announcement for the rendezvous was posted in the official Facebook and Twitter accounts of UP Diliman. The news then immediately broke out in social networking sites that UP MBT will be welcomed home with Palami’s promised bonfire. Photos, statuses, and tweets on the pre-bonfire set-up in the Sunken Garden spread like a wildfire and served as invitation to the public.

People started to pour in at the Sunken Garden as early as 5pm. University athletes of different sports and their coaches led by College of Human Kinetics Dean Ronualdo Dizer were also present in the merrymaking. The program started at 6:30pm, with the revelers gathering around the bonfire in the middle of the Sunken Garden. Chancellor Michael Tan personally lighted the bonfire using a torch.

In his speech during the event, Tan stressed that UP excels “not just in academics,” and went on to call for continuous support to the Varsity. He added that ever since UP became the national university, the Fighting Maroons are no longer representing their alma mater alone, rather the whole nation.

The crowd was pepped up by loud music and cheers that are identified with the UP Varsity Pep Squad. Palami, Dizer, and several members of UP MBT also had the floor to publicly express their gratitude to the UP community. Also highlighted were the crucial contributions of top scorers Mikee Reyes and JR Gallarza in vanquishing the winless Falcons. Towards the end of the program, the UP Naming Mahal was sung in chorus.

The set-up and preparations for the event were carried out by the Campus Maintenance Office (CMO) led by Engr. Alden Jose Aynera. According to CMO, a cauldron was used instead of lighting up a traditional bonfire for safety purposes. The orders to transport the cauldron and prepare for the lighting ceremonies from the Chancellor were received by CMO on Friday, a night before the bonfire lighting.