Articles on politics and identity in latest “Social Science Diliman” 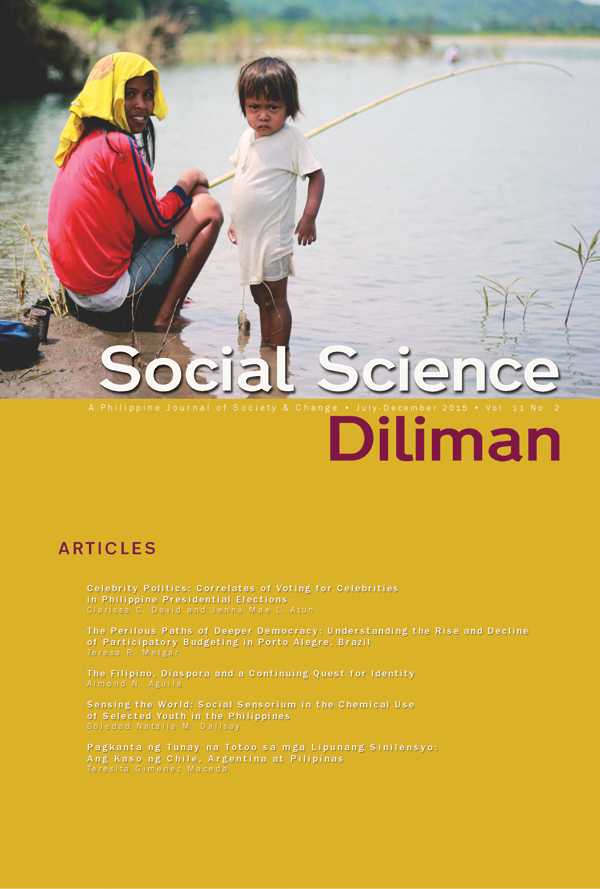 The researches featured are: “Celebrity Politics: Correlates of Voting for Celebrities in Philippine Presidential Elections” by Clarissa David and Jenna Mae Atun; “The Perilous Paths of Deeper Democracy: Understanding the Rise and Decline of Participatory Budgeting in Porto Alegre, Brazil” by Teresa Melgar; “The Filipino, Diaspora and a Continuing Quest for Identity” by Almond Aguila; “Sensing the World: Social Sensorium in the Chemical Use of Selected Youth in the Philippines” by Soledad Dalisay; and “Pagkanta ng Tunay na Totoo sa mga Lipunang Sinilensyo: Ang Kaso ng Chile, Argentina at Pilipinas” by Teresita Gimenez Maceda.

Editor-in-Chief Geoffrey M. Ducanes in his “From the Editor” said the pieces focus on different issues but the two overarching themes appear to be politics and identity.

David and Atun’s research finds that education, television exposure and living in the capital city are significantly associated with the preference for celebrity candidates.  Ducanes wrote that the research “takes on a special prevalence” because of the coming presidential elections.

Melgar’s research is about “the shifting fortunes of participatory budgeting … in the place where it originated.”  Ducanes wrote the study offers valuable lessons as there are aspirations for “greater participative democracy in our country.”  Meanwhile, Aguila’s piece is about “Filipinoness.”  This is a concept which the author said “may be evolving, varied and fluid rather than singular and changing.”

Dalisay’s research found, among others, that the youth has a strong preference for light skin because “it is seen to expand the social, symbolic and economic capital of those who possess it.”  Her data were gathered from young men and women in a port city in the Philippines and examined the importance of chemicals in the lives of the youth.  Lastly, Maceda’s research is about “the crucial role the songwriters and their songs played in countering authoritarian governments and in preserving a nation’s collective memory.”

Ducanes also said the five articles showcased the varied methodologies the social scientists used in the studies featured and “the different ways they make their case.”

David and Atun’s research applied the econometric analysis on nationally-representative survey data that examined “the correlates of voter preference for celebrity Presidential candidates,” while that of Melgar’s used configurational analysis.  For her research, Aguila applied the “postmodern lenses and … “kuwento-discourse,” as Dalisay used the interpretive approach.  Lastly, Maceda applied discourse analysis in her research.