Art attack for a day, the Filipino way 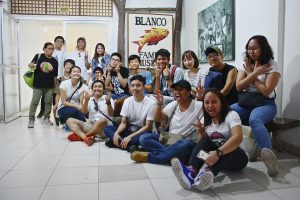 The Office of International Linkages Diliman under the Office of the Vice Chancellor for Academic Affairs (OILD-OVCAA) went on its first Cultural Exposure Field Trip last Nov. 26.

International students from Japan, Europe and Southeast Asia were brought to Paete, Laguna and Angono, Rizal, the country’s wood carving capital and art capital, respectively, for them to get a glimpse of Filipino Artistry for a day.

In Paete, the students were introduced to various forms of carving using different media such as wood, ice, vegetables and fruits.  The wood used for carving called “batikuling” is particularly interesting.  According to the locals, it actually comes from an indigenous tree that has an inherent anti-termite property, allowing sculptures made of this material to last a hundred years.

The group met local sculptors who demonstrated their expertise, were allowed hands on experience in “taka” making or papier mâché and carving, learned a little about Paete along the way, and participated in a trivia contest where the winners may take home with them a carved fruit or vegetable. 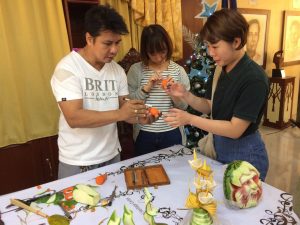 The trip in Paete also included a tour of the century-old Santiago Apostol Parish, a walk down tourist lane for souvenir shopping, and lunch at a local cantina.  Since Paete is nestled in the bosom of Sierra Madre, there were intermittent drizzles throughout the day, which the townsfolk considers a constant blessing.

In Angono, the group was given a glimpse of some Angono treasures through the works of Nem Miranda and the Blanco family.  In the Nemiranda Art House, the group had the chance to see Miranda’s recent work, “Battle of Marawi.”  The set of paintings called the Marawi Series was headed to Tagum, Davao for its first public exhibit.  There were also sculptures of Filipino mythical creatures “tikbalang,” “serena” and “kapre.”

Meanwhile, the students were treated to the paintings of the Blanco family at their museum.  A family of painters, each member was given a designated area in the gallery to show their work.  The children of Pitok Blanco apparently started painting as early as two or three years old.  The artist gene was already quite undeniable, clearly shown in their exhibited work at that age.

Aside from paintings, the group also turned their interest to the Blanco museum’s emblem of an upside down fish.  According to the guide it is a “bunggan” or bloated fish – a moniker given to the Blanco’s great grandfather who was a fisherman.  Apparently, he used to rest on top of his turned over fishing boat for his siestas.  Since he was bald and stout, the townspeople teasingly called him a “bunggan.”

The OILD-OVCAA’s first cultural exposure field trip served not only as an educational tour for the international students and a promotional tool for Filipino art, but also as a way of recognizing the students as part of the UPD community, even if it is just for a semester.  The exercise is vital in providing UPD’s international students a memorable experience in the Philippines, and to keep partnerships with universities abroad vibrant and alive.