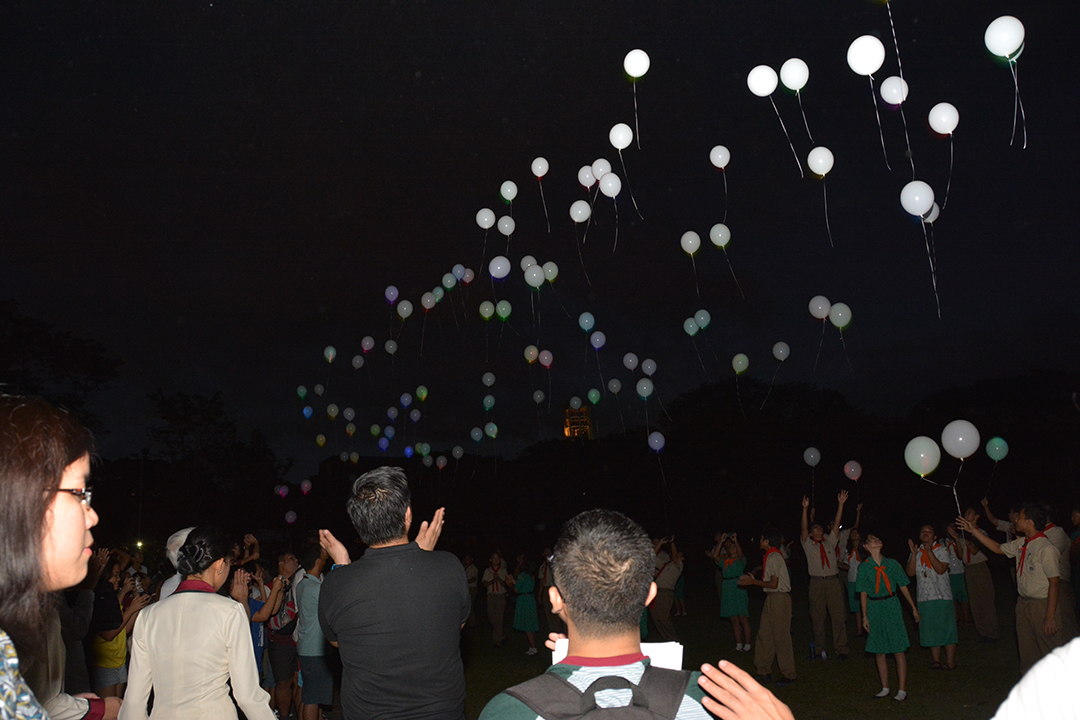 (DEC. 28)—The traditional pag-iilaw ceremony where the Christmas decorations of major buildings on campus are lit was given a colorful twist last Nov. 27 when the entire UPD community joined in recreating a Kapampangan Christmas tradition.

According to the Philippine Daily Inquirer, Lubenas “consists of street processions held for nine straight nights for the Missa de Gallo. Candle-lit, white paper lanterns shaped into crosses, stars, fishes, angels and sheep illuminate the images of patron saints of villages during the processions.”

The theme and design of this year’s Christmas lights were by artist and UP College of Architecture alumnus Toym Imao in keeping with the theme “Dingas: Adhikaing Diliman, Adhikaing Bayan.” Prior to that, the Oblation statue had been kept covered for several days to protect the artwork from the elements. 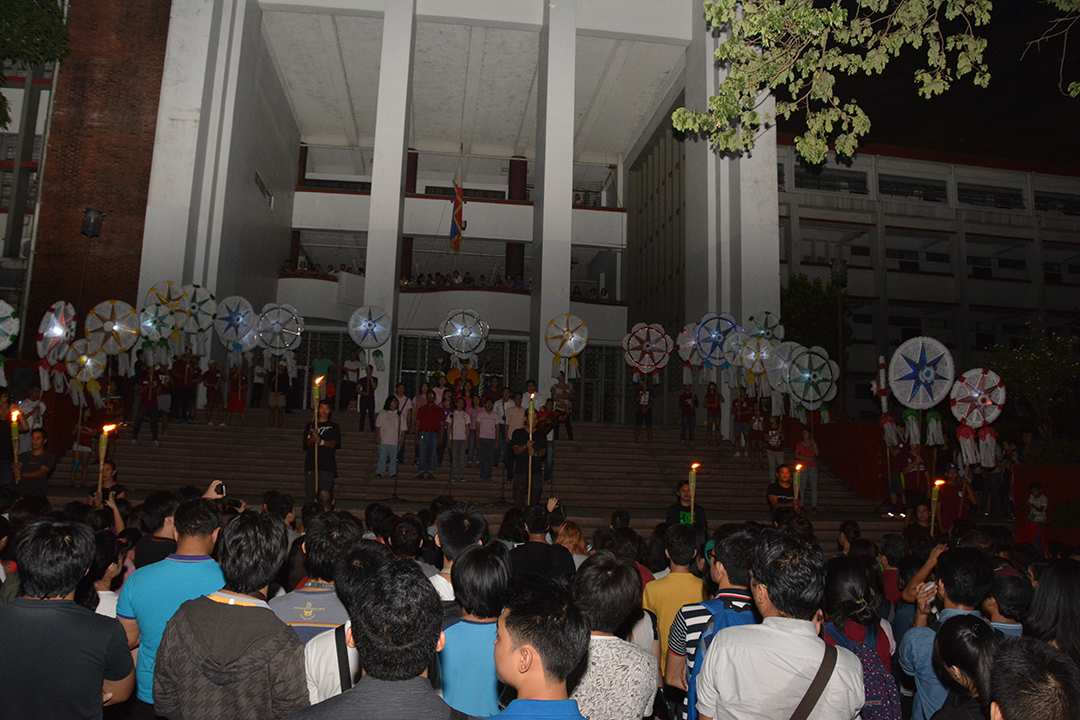 Before the flag retreat, the covers were removed to reveal the stunning flame-inspired design. Flame-shaped “torches” lined the entire Academic Oval and the University Avenue.

Flag retreat and Aninag. Celebrations began with the monthly flag retreat, where Marynor Madamesila regaled the gathered crowd with her rendition of “Gabing Payapa” by Felipe de Leon. 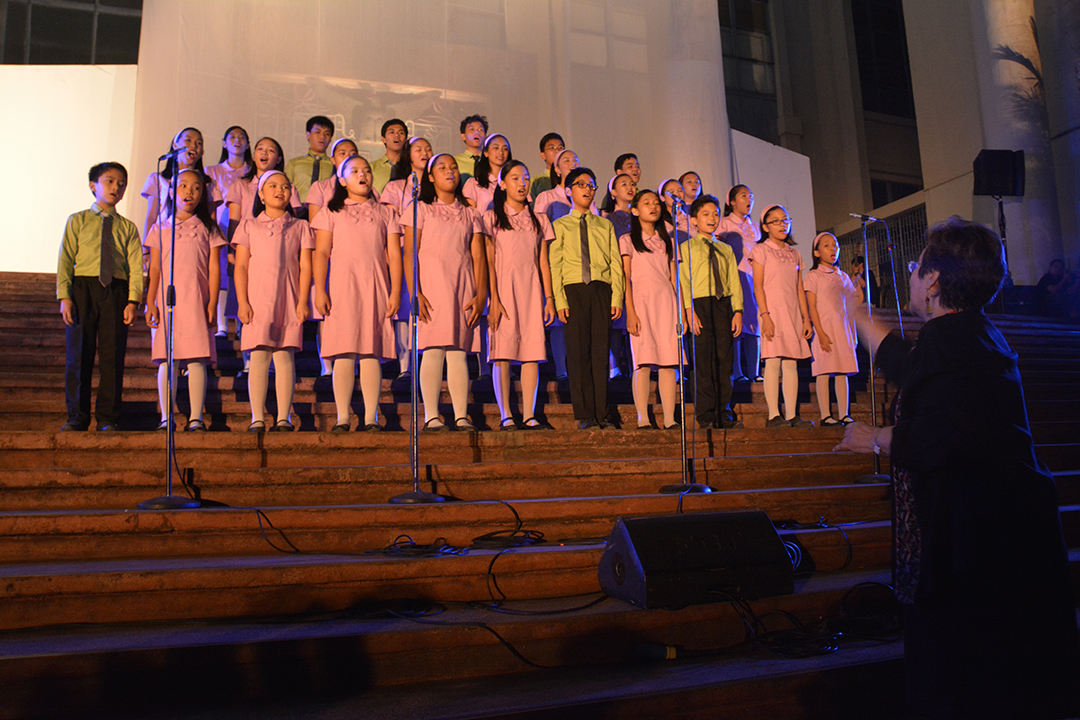 Until the end of the parade the street lights along the Academic Oval remained closed, the light of the lanterns and the sound of the UP ROTC Symphonic Band serving as the only guide for the parade participants. UP System and UPD officials joined the parade.

There were a total of six stations featuring UP Diliman’s performing arts groups. At each station Lubenas-carrying students joined the ones in the parade, making for a total of 12 Lubenas.

From the Quezon Hall steps the parade made its way to the University Amphitheater, where 107 UP Integrated School students ceremoniously flew 107 balloons into the air, symbolizing UP’s 107 years as the parade passed. 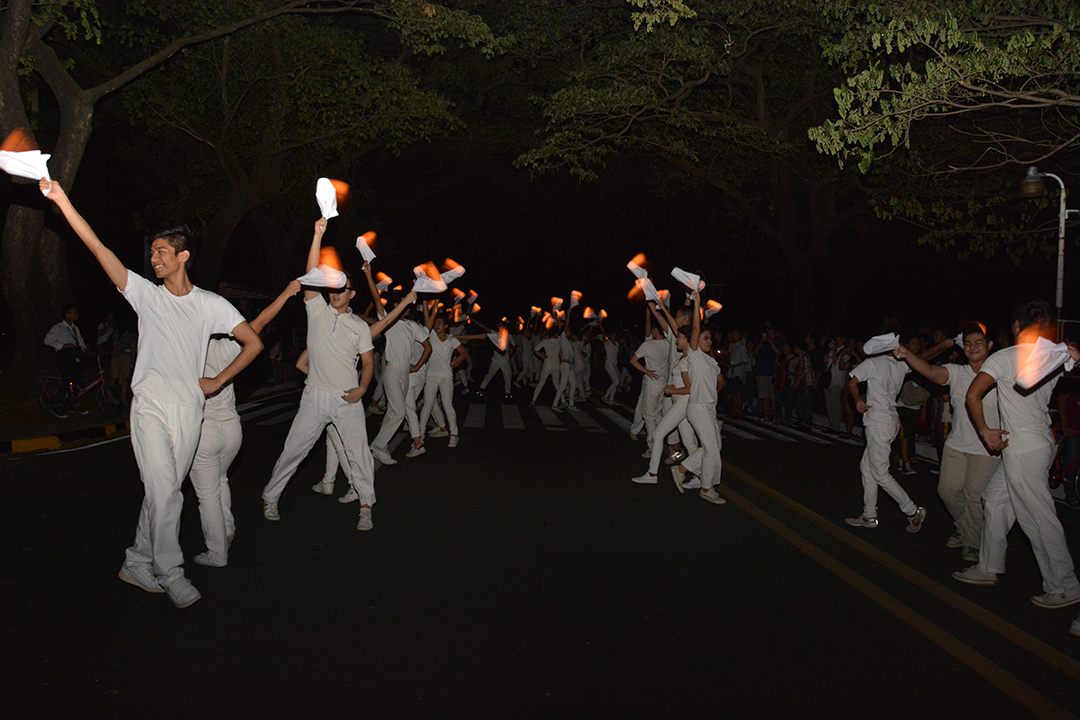 The parade made its way down the dark streets of the Academic Oval to the first station at Vargas Museum, where the UP Dance Company brought to life Tan-Aw featuring music by Steve Reich. At the back drop was Fernando Amorsolo’s “Harvest Scene.”

It then proceeded to Palma Hall, where the UP Pugad Sayk Tiriritz delivered their stirring rendition of “Himig ng Pasko” by Serapio Ramos while College of Social Sciences and Philosophy staff carried torches to light up the Palma Hall steps.

From there the parade moved to Gonzalez Hall or the Main Library, where they were treated to a shadow play performance of the late Rene Villanueva’s “Istariray: ang Bituing May Buntot.” The play recounts the tale of Istariray, a star who feels lonely and isolated from other stars because she was born with a large and bright tail. The play was accompanied by Sigmund Pecho, Io Balanon and Nour Hooshmand with the UP Guitar Guild. 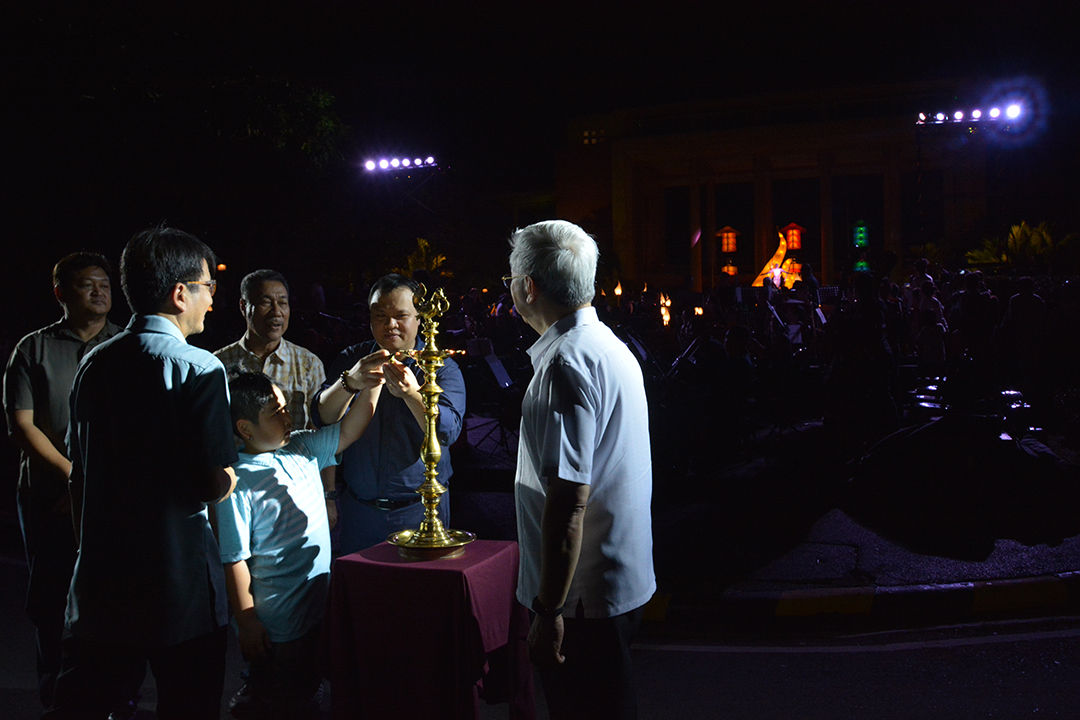 The play was followed by a performance by the UP Cherubim and Seraphim, who sang “Dalangin sa Pasko” and “Masayang Pasko po, Ninong” by Juan Silos under the baton of Dr. Elena Mirano.

From Gonzalez Hall the parade proceeded to Melchor Hall, the home of the College of Engineering, where the UP Staff Chorale Society, who sang a mashup of “Tatlong Tulog na lang Pasko na” and “Sa May Bahay ang Aming Bati.”

The last stop was at the Carillon Plaza, where all 12 lanterns were placed. Replacing the lanterns in lighting the way were white-clad members of the UP Filipiniana Dance Group, the UP Dancesport Society and the UP Varsity Pep Squad, who swung lit candles inside handkerchiefs as they guided the parade goers to the front of the Oblation Plaza.

Before settling down they were treated to snacks and tea made from the Roselle plant, a species of hibiscus, found and harvested along the University Avenue. 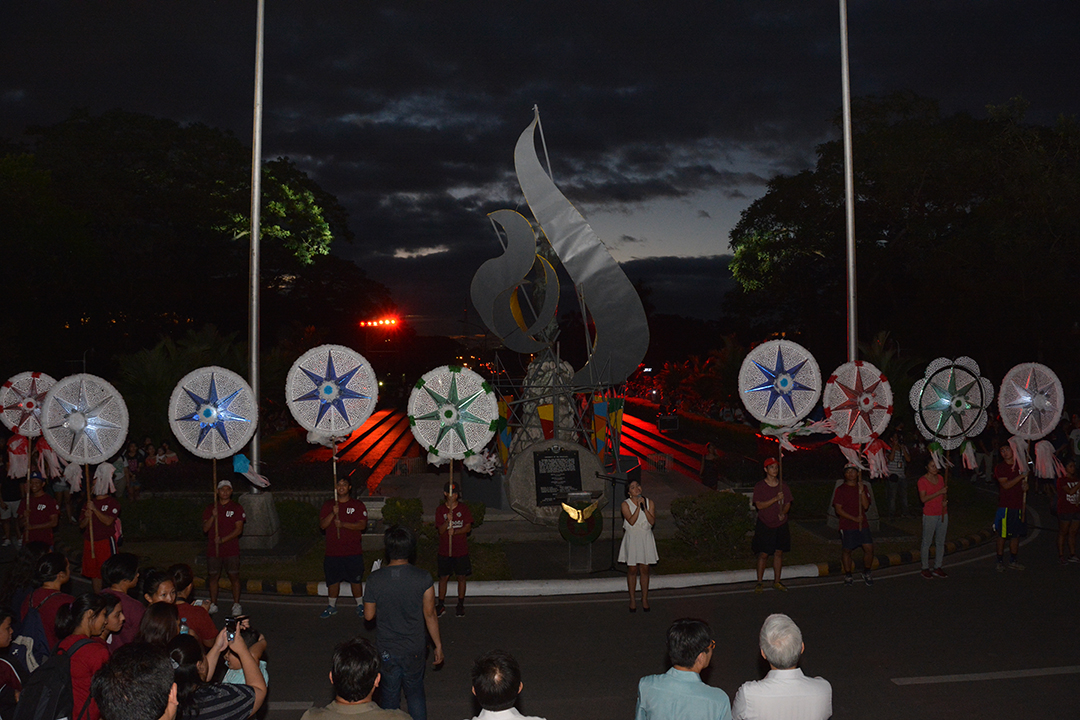 The parade ended where it began, with the parade goers joining the crowd that gathered in front of the Oblation Plaza for the lighting ceremony.

Then the music began as the UP College of Music (CM) Centennial Festival Orchestra and the UP Chorus Class, UP Concert Chorus and UP Madrigal Singers began singing “Simbang Gabi” by Lucio San Pedro under the baton of the Prof. Josefino “Chino” Toledo.

Lighting Quezon Hall. Instead of the usual lighting ceremony, a special lamp with five wicks was ceremoniously kindled. With every flame lit, a portion of the Christmas decorations on campus was also switched on.

The first wick was lit by Manny Casalan of the College of Arts and Letters (CAL), representing the administrative staff and UPD community. The “torches” lining the University Avenue were simultaneously lit. Asian Center Dean Joefe Santarita, representing the academic community, lit the second wick. At the same time the entire Academic Oval was bathed in light. 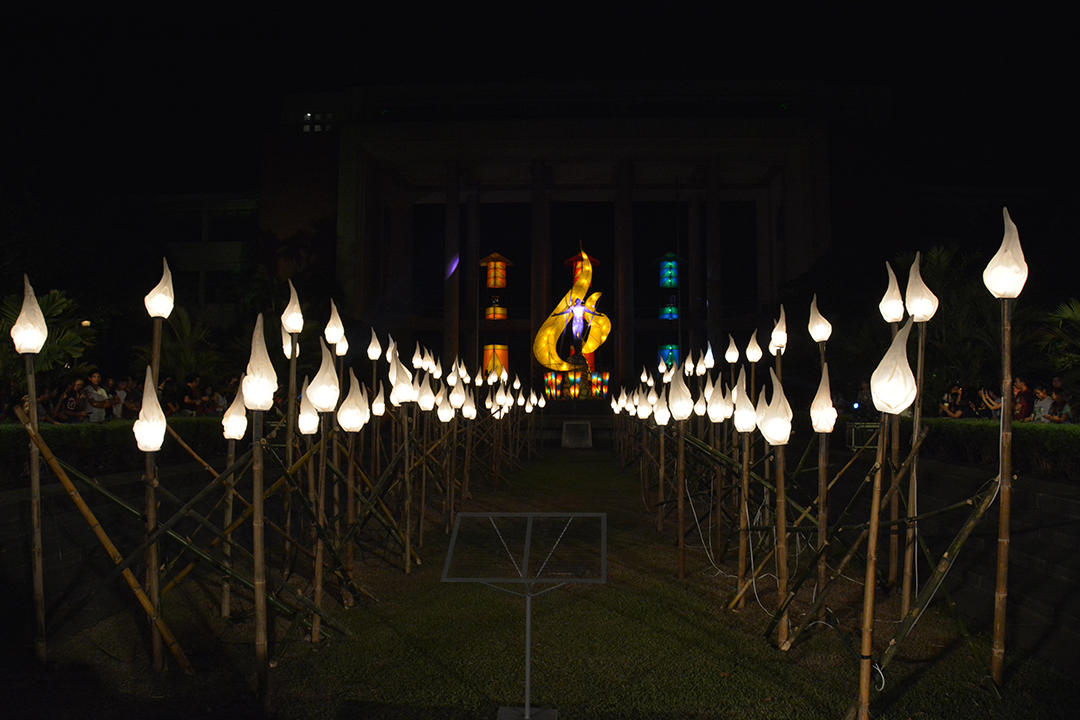 The opening notes of Rivermaya’s “Liwanag sa Dilim” broke the applause that followed the lighting, and MC dela Cruz of the CAL backed by the choir and the orchestra began to sing. He was soon enthusiastically accompanied by the audience.

At this point the formal ceremony was over, but one more surprise awaited the audience as the UP Streetdance Club gave an energetic performance, the members popping and locking to popular tunes, much to the crowd’s delight and concluding with their hands lit by LED lights and lifted up to the sky.—Anna Regidor, photos by Leonardo Reyes.