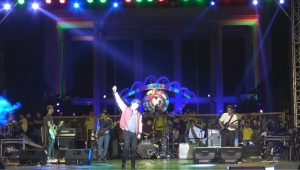 If there are two words to describe Sandwich’s mini concert at the Pag-iilaw 2017 held in front of the Oblation Plaza on Nov. 24, it will be electrifyingly nostalgic, figuratively and literally.

After all, Raimund Marasigan is a very familiar face in the rock concert scenes having been known not only as Sandwich’s frontman but also as the former drummer of the Eraserheads, the highly popular Pinoy rock band in the ‘90s.

Wearing a UP Fighting Maroons jacket and bull cap, Raimund went up the stage and made a sound check making the overexcited crowd burst into riotous applause and cheers. 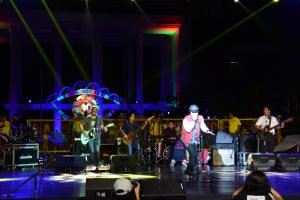 Young and older fans got even more hyped up when Raimund started singing Sandwich’s hit single “Betamax” for their opening act. The perkiness of “Betamax,” a song from the band’s fifth studio album “<S> Marks the Spot” (2008), was a quick trip down memory lane as its lyrics enumerated familiar nostalgic stuff such as Jingle magazine, cassette and vinyl records, and names of musicians like Pepe Smith, Mike Hanopol, Sampaguita, Francis M., Gary V. and Sharon Cuneta, to name a few, that were popular during the Betamax era. Betamax is the consumer analog-recording and cassette format of magnetic tape for video developed by the Japanese multinational conglomerate Sony Corporation in 1975.

The energy-infused rock and roll song “Procastinator,” also from the album “<S> Marks the Spot,” was performed next with Raimund’s cue “We are your Sandwich. I am your sonic death monkey! Chill,” prompting some fans to scream some more and headbang to its tune.

Just when the song was about to end, it began to drizzle, but Sandwich was unfazed and continued to perform.

At the end of the song, Marasigan, who earlier said they consider themselves as “local” (not an outsider), thanked the audience for the warm reception and said 30 years ago, he and Myrene were students at the UP Diliman (UPD) College of Mass Communication. 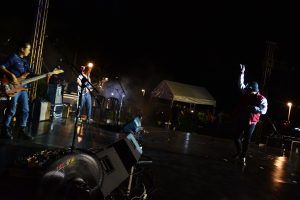 Meanwhile, the drizzle slowly turned into rain. Raimund reminisced the time when they discovered their love for music at UPD from watching performances of musicians like Romeo Lee and Joey Ayala at the AS Steps and University Amphitheater. Just when he was about to continue his story about learning how to record songs through the help of former Eraserheads record producer and humanities professor Robin Rivera, everyone was startled by the audio feedback from one of the electric equipment on stage that were soaked by rain.

The band soldiered on and played another song. Sandwich then performed an Eraserheads song “Sembreak” Raimund composed 30 years ago at the Molave Residence Hall. Almost all the crowd knew its lyrics and sang with the band while hastily opening their umbrellas to shield themselves from the relentless rain soaking the campus grounds.

In the middle of the song, some people from the audience already ran for cover as the party pooper rain continued to fall.

The stage hands tried to protect the equipment with big umbrellas. However, some of the band members were already being grounded. On the fourth song on the setlist, Sandwich decided to make it their last performance to avoid possible electrocution from the electric instruments and equipment drenched by rain.  Raimund apologized and thanked the crowd for their support. Afterwards, the band performed their staple hit “Sugod” for the finale.