An imeldific bonfire for Imelda’s conviction 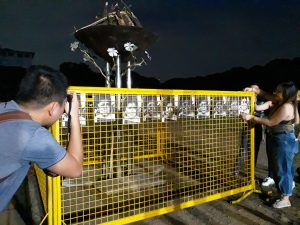 A bonfire was held by constituents of UPD at the Sunken Garden on Nov. 9 at 6 p.m. to extol Sandiganbayan’s conviction of Ilocos Norte Rep. Imelda Marcos for seven charges of graft.

The decision on the graft complaints filed against the wife of dictator Ferdinand Marcos was made earlier that day by the 5th Division of Sandiganbayan. The charges stemmed from Mrs. Marcos’ abuse of her Cabinet position as Minister of Human Settlements to siphon government funds into her personal Swiss bank accounts from 1968 to 1986 during her husband’s rule. In effect, the former first lady faces arrest, imprisonment from six years and one month to 11 years for each charge, and perpetual disqualification from holding public office.

Illuminating Diliman from that dark expanse and drawing faculty, students, staff, and passers by, the bonfire was peppered on its fences with petrified photos of Mrs. Marcos. A short program was held where student organizations and college councils expressed their messages of solidarity. Alay Sining, a cultural organization based in UPD, performed songs about the dark period of Martial Law and the role of unity in thwarting dictatorship in all generations. 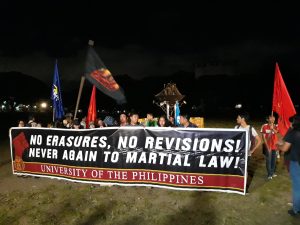 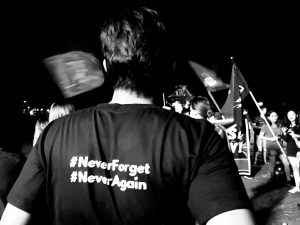 The event was spearheaded by the UP Department of History and supported by the UPD Executive Committee.